'The Great One': Joe Rogan Offers His Support to Elon Musk Amid Battle for Twitter Ownership 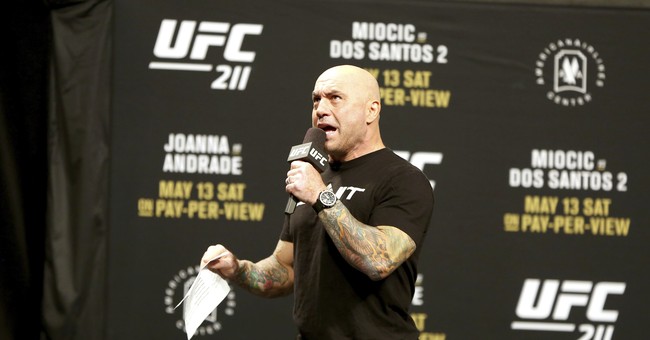 Podcast host Joe Rogan said in a recent episode of his show that he supports Tesla founder Elon Musk's attempt to take over Twitter.

Earlier this month, Musk revealed he had purchased 9.2 percent of the social media giant. And last week, the billionaire offered to buy Twitter for $43 billion, prompting outrage by a number of the platform's users. Twitter's board of directors adopted a "poison pill" to curb his efforts to buy the company.

Rogan said during Saturday's episode of "The Joe Rogan Experience" that Musk was one of the "powerful leaders" people look to when seeking guidance.

"That's why, me included, everyone is so excited that Elon Musk is trying to buy Twitter," Rogan said. "We're like, 'Yes! The great one!'"

"He's the super-intelligent leader-type character that seems to have great ethics and morals too," he continued. "And he seems to be, like, a guy that if you had a movie character, and the movie character was like this super billionaire who didn’t give a f--k, but he was super f--king smart, and he's really, genuinely working to save humanity, that's that guy."

Earlier this month, Maher said he's "all for" Musk trying to take over the social media platform.

"We live in a different age where Twitter is the public square now," Maher said. "If you deny someone's right to speak on Twitter, you're basically saying you don't have free speech rights. We're not living in 1980 anymore. This is a different world we live in where social media controls this. So social media is sort of a… it's living in a space that's not exactly a publication, but it's not exactly a private company either… That's why it's so tricky."

Maher added that he thinks "that's what Elon Musk wants to fix at Twitter."

But the mainstream media is less than thrilled at the idea of Musk taking over Twitter.

Axios wrote after Musk's attempt to buy Twitter, "The world's richest man — someone who used to be compared to Marvel's Iron Man — is increasingly behaving like a movie supervillain, commanding seemingly unlimited resources with which to finance his mischief-making."