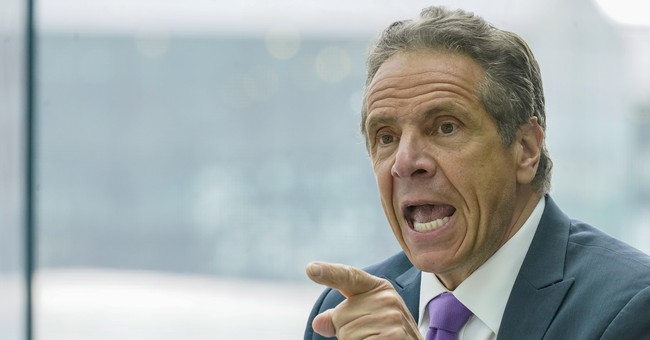 Former New York Gov. Andrew Cuomo (D) said Sunday in his first public remarks since resigning from office last year amid sexual harassment allegations that cancel culture and the media are to blame for his ouster.

Speaking at the God’s Battalion of Prayer Church in Brooklyn, where he quoted the Bible several times, the disgraced ex-governor said his sex scandal was "probably the toughest time of my life."

"As you probably know, I've gone through a difficult period the past few months. I resigned as governor, the press roasted me, my colleagues were ridiculed, my brother was fired. It was ugly. It was probably the toughest time of my life, and it was probably the first time that I was glad my father wasn't here with us anymore, so he didn't have to see," he said, referring to his late father, former New York Gov. Mario Cuomo.

During his speech, Cuomo claimed "cancel culture" and dirty politics was why he reached his political demise.

"My father, God rest his soul, used to say government is an honorable profession but that politics can be a dirty business," he said. "Now that is especially true today when the politics out there is so mean and so extreme, when even the Democratic Party chooses to cancel people that they have a disagreement with."

The Democrat, noting that his behavior has not changed in 40 years, went on to say that "new sensitivity" among the younger generations led to the sexual harassment allegations.

"My behavior has been the same for 40 years in public life. … But that was actually the problem. Because for some people, especially younger people, there's a new sensitivity," Cuomo said. "No one ever told me I made them feel uncomfortable. I never sensed that I caused anyone discomfort. I was trying to do the exact opposite."

"But I've been called old-fashioned, out-of-touch, and I've been told my behavior was not politically correct or appropriate. I accept that. Social norms evolve and they evolve quickly. But I didn't appreciate how fast the perspectives changed. And I should have," he continued, adding that he is "truly sorry" and has "learned a powerful lesson."

He added that "God isn't finished with me yet."

Cuomo also attempted to discredit state Attorney General Letitia James' investigation that found he sexually harassed 11 women, a violation of state and federal law. James' probe ultimately led to his resignation in August as he was facing the threat of impeachment.

"Contrary to what my political opponents would have you believe, nothing I did violated the law or the regulations," he said. "I said from the start that I would defend any allegation that anyone wanted to bring, but the political sharks in Albany smelled blood. And then the sharks smell blood, then come. And they exploited the situation for their political purpose."

He said there was "prosecutorial misconduct" regarding the investigation into his sexual harassment allegations and that "cancel culture" was used to "effectively overturn" his 2018 gubernatorial victory.

Cuomo said during his Sunday speech, "With cancel culture, we now live in a frightening new world where any accusation can trigger condemnation without facts, without due process. We are a nation of laws – not a nation of Tweets. Social media and Twitter spread cancel culture like a virus. They allow the extreme minority to overpower the reasonable majority."

Also during his remarks, Cuomo used a Biblical metaphor of crossing a bridge to describe his political career and suggested he may seek a return to public life.

"The Bible teaches us perseverance, it teaches us to get off the mat. They broke my heart but they didn't break my spirit," he said. "I want to take the energy that could have made me better and make us better."

The ex-governor's speech comes after he launched a 30-second TV advertisement on Monday saying that he has been exonerated from the sexual misconduct allegations. The ad highlights reports showing that five district attorneys decided against bringing charges against him. He also took shots at James' report in the ad.

And while Cuomo resigned because of the sexual harassment allegations, his controversies extend beyond them.

He has faced criticisms for using state resources to write his memoir, "American Crisis: Leadership Lessons from the COVID-19 Pandemic," and for his decision to place COVID-positive patients in nursing homes, which led to countless elderly nursing home deaths.