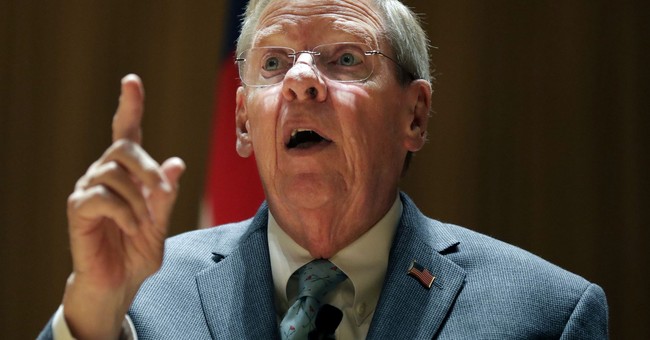 Former Georgia Sen. Johnny Isakson (R) died Sunday at the age of 76, just days before his 77th birthday. Politicians on both sides of the political aisle mourned the death of the longtime lawmaker.

"It is with deep sorrow that The Isakson Initiative shares that former U.S. Senator Johnny Isakson passed away overnight on December 19, 2021, at age 76. Sen. Isakson’s family is grateful for the prayers and support," the Isakson Initiative announced on Twitter in a post from the former senator’s account.

Isakson’s son, John Isakson, told The Associated Press that his father died in his sleep in his Atlanta home and, while his father was suffering from Parkinson’s disease, the cause of death was not immediately clear.

"He was a great man and I will miss him," John Isakson said.

During his tenure in Congress, Isakson helped create the No Child Left Behind education law and made efforts to reform the Department of Veterans Affairs, immigration policy and health care, the Atlanta Journal-Constitution reported.

Georgia Gov. Brian Kemp released a statement following Isakson's death, saying that "Georgia has lost a giant, one of its greatest statesmen, and a servant leader dedicated to making his state and country better than he found it."

"Johnny was also a dear friend to Marty, the girls, and me — as he was to so many. He answered the call to public service many times over his career as a state legislator, minority leader in the Georgia House, chair of the State Board of Education, Congressman, and finally as Senator," Kemp said.

"His work to champion our veterans, deliver disaster relief for Georgia farmers after Hurricane Michael, and always stand up for Georgia's best interest in the U.S. Senate will live on for generations to come," he continued. "As a businessman and a gifted retail politician, Johnny paved the way for the modern Republican Party in Georgia, but he never let partisan politics get in the way of doing what was right."

President Joe Biden, who served alongside Isakson in the Senate, said that the Biden family is "saddened to learn of the passing of Johnny Isakson, the distinguished former United States Representative and Senator from Georgia."

"Senator Isakson was a colleague and a friend," Biden said in a statement. "We served together on the Senate Foreign Relations Committee, traveled together, and found common ground built on mutual respect for each other and the institutions that govern our nation. "Johnny was a proud Republican, but he put country before party, and valued building consensus over political combat. I always loved Johnny’s description of the only division he saw as between 'Friends and future friends.'"

Isakson leaves behind his wife, three children and nine grandchildren.