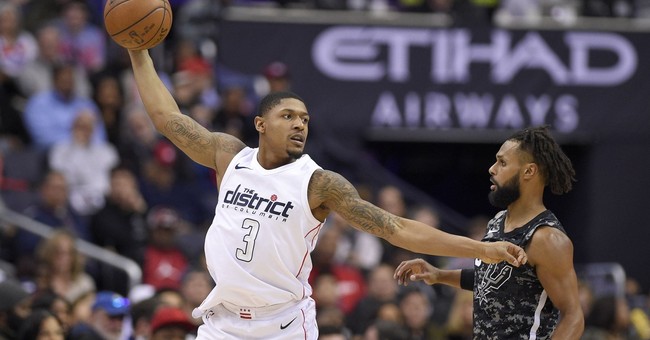 Multiple NBA players — Orland Magic forward Jonathan Isaac, Brooklyn Nets guard Kyrie Irving, Golden State Warrior forward Andrew Wiggins and Washington Wizards guard Bradley Beal — are among the league's unvaccinated players and have all expressed that the decision about whether to get vaccinated against COVID-19 should be a personal choice.

This comes after an article last week from the Rolling Stone claimed that Isaac, Irving and Wiggins were "anti-vaxxers" for electing not to get inoculated. Beal spoke on his vaccination status a few days after the piece was published.

Isaac, who has natural immunity, slammed the article during the Magic's Media Day and dispelled assertions detailed in it that alleges he chose to not get vaccinated based on information he obtained from studying black history or watching old press conferences featuring former President Donald Trump.

"I am not anti-vax, I’m not anti-medicine, I am not anti-science," Isaac said during a press conference Monday. "I didn’t come to my current stance by studying Black history or watching Donald Trump press conferences. I have nothing but the utmost respect for every healthcare worker and person in Orlando and all across the world that have worked tirelessly to keep us safe. My mom has worked in healthcare for a really long time. I thank God and I’m grateful that I live in a society where vaccines are possible, and we can protect ourselves and have the means to protect ourselves."

Isaac went on to say that each individual should be able to make the decision that is best for them about whether or not they should get the shot.

"But with that being said, it is my belief that the vaccine status of every person should be their own choice," Isaac said. "Completely up to them without bullying, without being pressured, without being forced into doing so.

"I’m not ashamed to say that I’m uncomfortable with taking the vaccine at this time," he continued. "We’re all different. We all come from different places. We’ve all had different experiences and hold dear to different beliefs. And what it is you do with your body when it comes to putting medicine in there should be your choice, free of the ridicule and the opinion of others."

Jonathan Isaac shares that he's had Covid in the past when answering a question on vaccine hesitancy. pic.twitter.com/acwqXgjhEA

Issac has developed a reputation as a deeply religious person who goes against what is considered to be popular by the NBA community. He notably stood during the national anthem in the NBA bubble at the end of the 2020 season while most of his fellow players kneeled in solidarity with Black Lives Matter.

Irving, who was not able to physically show up to Media Day Monday due to New York City Mayor Bill de Blasio's executive order that requires athletes in the city show proof of vaccination, has not directly confirmed his vaccination status but did say that he wished to keep his medical information private.

Wiggins, like Irving, would not disclose his vaccination status at his team's Media Day Monday and instead told reporters that "its none of your business" whether or not he has received his shots.

The NBA previously denied Wiggins religious exemption from getting the vaccine, as Townhall reported. All Warriors players must be vaccinated in order to play in their home arena because the city of San Francisco requires everyone 12 and up to get the shot if they wish to enter. Additionally, the city does not allow religious or medical exemptions, and will not accept a negative COVID test in place of proof of vaccination.

New York City and San Francisco are the only areas that require that players must be vaccinated to play in home games. These local vaccine requirements do not apply to athletes competing for visiting teams.

Beal had to miss out on participating in the Tokyo Olympics this summer after being invected with the coronavirus but still remains unvaccinated. At the Wizards Media Day Monday, the 28-year-old guard said he is "still considering getting the vaccine" but that he has not yet received the shot and does not think anyone should be forced to get it.

"It’s a personal choice between everybody. 100%. I understand both sides of it," Beal said. "I understand that there is a percentage of people who can get very sick. I didn’t get sick. I didn’t get sick at all. I lost my smell but that was it for me. Everybody is going to react different. Everybody is going to take it differently."

And while 90 percent of NBA players have already been vaccinated, many who already received their shots still believe that the decision of whether to get vaccinated should be left up to each individual.

"It's tough being told what you can and can't do with your own body," Boston Celtics guard Marcus Smart said. "I chose to get vaccinated because, quite frankly, I didn't feel like dealing with the BS that was revolving around it. That was my decision. I stand by anybody who makes their own decision to feel what they feel best for themselves."

Los Angeles Lakers forward LeBron James, arguably the league's best player, has been vaccinated but did admit that he was hesitant at first. He also pointed out that he believes every individual should decide for themselves whether they get the vaccine or not.

"I think everyone has their own choice to do what they feel is right for themselves and their family, things of that nature" James said at Lakers’ Media Day. "I know that I was very [skeptical] about it all, but after doing my research and things of that nature, I felt like it was best suited for not only me but my family and my friends, and that's why I decided to do it."

LeBron James explains his decision to get vaccinated, but wanting to respect others for whether they decide to get it pic.twitter.com/khPH3NePAX

However, there are critics within the NBA and the media who have said they believe that NBA players must be vaccinated against the coronavirus.

"We are leaders, community leaders, and there’s so many people idolizing us," Boston Celtics center Enes Kanter said. "We need to use this platform to encourage others to get vaccinated."

NBA Hall of Famer Kareem Abdul-Jabar went as far as to say that those who refuse the vaccine should be removed from their respective teams.

"There is no room for players who are willing to risk the health and lives of their teammates, the staff and the fans simply because they are unable to grasp the seriousness of the situation or do the necessary research," he said, according to the Rolling Stone article.

ESPN’s Scott Van Pelt, during his Monday night show, slammed vaccine hesitant players who wish to do their own research before getting the shot: "What type of research? Where? Is it something you read or heard somewhere? Are you researching smallpox vaccines? Polio? Flu shots? Any of that?"

The NBA is not requiring its players to get vaccinated, according to ESPN. However, coaches, referees and others team employees must get the shot.