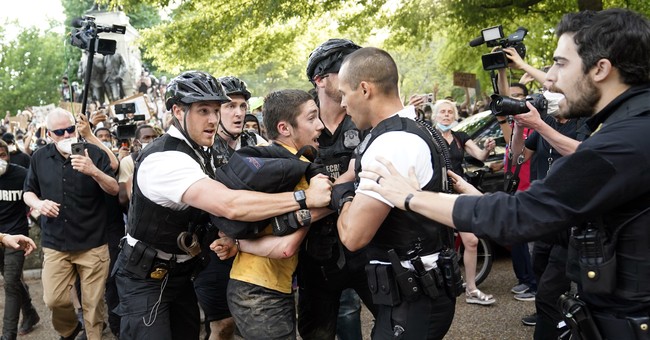 More than 250 Australian residents were apprehended by police Saturday amid the country's anti-lockdown protests.

People across several Australian cities defied the coronavirus stay at home orders and were arrested following altercations with police officers. At least cops endured injuries from the protests and Melbourne saw the most violent demonstrations, according to the Associated Press.

More than 4,000 people protested the COVID measures in Melbourne while police released pepper spray into the crowds to stop demonstrators from crossing police lines. Police said in a statement that they had no choice but to unleash the pepper spray as altercations hospitalized six officers.

Police 218 people were arrested in Melbourne and 236 fines of $3,900 each were handed out for violating public health orders.

In New South Wales, police announced 47 arrests and more than 260 fines of up to $3,000. New South Wales Deputy Commissioner Mal Lanyon said police will likely identify more people through CCTV and social media footage. Nearly 140 tickets were issued as well after around 38,000 cars attempted to drive into the city.

After a record number of COVID-19 cases in New South Wales earlier this month, the region was placed under an extended coronavirus lockdown.

Sydney has been locked down for nearly two months while Melbourne and Canberra issued their stay at home orders in early August. Residents of the cities are told to limit social interactions and remain in their homes.

The state of Victoria has banned residents from removing their masks to drink alcohol in outside settings amid the area's surge in coronavirus cases.

"We are in a very serious situation here in New South Wales," state Health Minister Brad Hazzard said, according to Reuters. "There is no time now to be selfish, it's time to think of the broader community and your families."