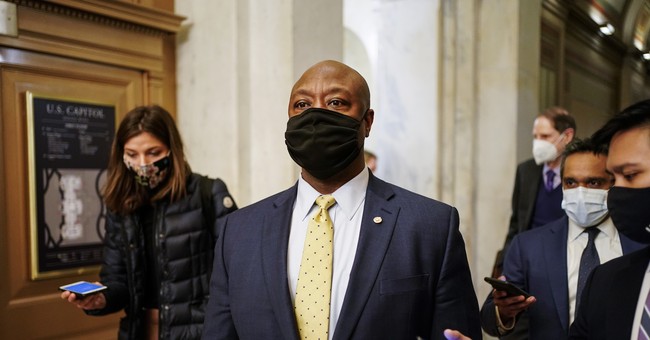 Republican Sen. Tim Scott (S.C.), said Sunday that "there is hope" for the police reform bill that lawmakers have been working on since last year in the aftermath of George Floyd's death.

"I think there is hope for the bill, without any question," Scott told host Martha MacCallum in a "Fox News Sunday" interview. "We worked on it yesterday. We’ll have it in the conversation today. We’ll be meeting tomorrow. I will be talking with law enforcement leaders tomorrow as well."

Scott, along with Sen. Cory Booker (D-N.J.) and Rep. Karen Bass (D-Calif.), the other chief negotiators for the package, announced last month that they “reached an agreement on framework addressing the major issues for bipartisan police reform.”

Negotiations have since hit a roadblock as agreements have not yet been reached on several issues, such as qualified immunity, which protects state and local government officials, including cops, from personal liability in civil suits if they did not violate an individual's clearly established constitutional rights.

Democrats want to scrap the legal doctrine from the bill while Republicans are lobbying for it to remain.

Scott set a new deadline earlier this month for the passage of police reform legislation, saying that "I don’t think we can do this, after this month, if we’re not finished."

He said he "would hope" the bill would pass with bipartisan support by the end of July.

Scott said Sunday that the police reform legislation must leave out "the impression that somehow we’re going to demonize police officers."

"When you demonize police officers, when you defund the police and you start talking about this war on police and prosecution and not on crime, you're going to have a reduction of forces, and if you tell officers that their personal liability is on the line, it is a bad decision," Scott said.

He said that this is "one of the reasons why we’ve never been negotiating on qualified immunity for the individual officer."

"It’s just bad policy. I won’t support it," he continued.