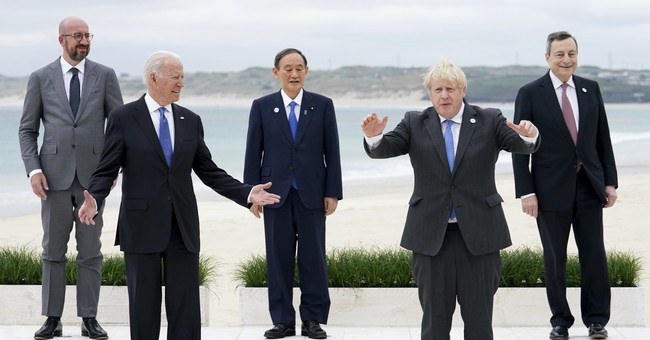 President Joe Biden said during a Sunday news conference at the G-7 Summit that the leaders of the seven countries are committed to cracking down on Chinese labor abuses.

A 25-page communique released on the final day of the three-day meeting said the leaders of The G-7 countries — the U.S., the U.K., Canada, France, Germany, Italy and Japan — were willing to collaborate on an effort to end human rights abuses in China.

The communique said the leaders will "continue to work together including through our own available domestic means and multilateral institutions to protect individuals from forced labour and to ensure that global supply chains are free from the use of forced labour."

The world leaders ensured that they will "promote our values, including by calling on China to respect human rights and fundamental freedoms." They specifically highlighted the abuses taking place in Xinjiang and Hong Kong.

Biden said at the press conference that China must begin acting responsibly in regard to "international norms on human rights and transparency" and that "the G-7 explicitly agreed to call out human rights abuses."

I think we're in a contest, not with China per se, but a contest with autocrats, autocratic governments around the world as to whether democracies can compete with them in the rapidly changing 21st century. And I think how we act and whether we pull together as democracies is going to determine whether our grandkids look back 15 years from now and say, 'Did they step up? Are democracies as relevant and as powerful as they have been?'

The White House said Sunday that Biden and the other G-7 leaders agreed to prioritize taking on China's forced labor in global supply chains.

The G-7 leaders also echoed the United States' belief surrounding the importance of discovering where the coronavirus came from, saying that there should be a "timely, transparent, expert-led, and science-based" investigation into the origins of COVID-19, including in China.

The president emphasized the importance of finding out whether the virus originated from an animal or a lab leak so that further pandemics can be prevented.