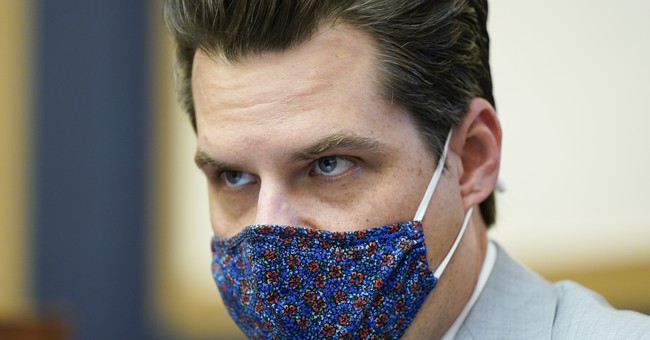 Newsmax joined One America News Network and Fox News in saying that they do not plan on hiring Rep. Matt Gaetz (R-Fla.) following reports indicating he was interested in leaving Congress to work in television at a prominent conservative news channel.

Brian Peterson, a spokesperson for Newsmax, told Reuters Monday that "Newsmax has had no plans to hire Rep. Gaetz."

The network said they had never expressed interest in hiring the congressman.

Fox News said in a statement in April that they did not have any interest in hiring Gaetz.

No one with any level of authority has had conversations with Matt Gaetz for any of our platforms, and we have no interest in hiring him.

Robert Herring, founder and CEO of OANN, told the Daily Beast that he was not looking to hire anybody for talk shows, which Gaetz was interested in.

Right now, I’m not really hiring anybody for talk shows. I think he is a great congressman, and I told [that ‘somebody’] to tell him to stay there. That’s what I want Congressman Gaetz to do.

Following an Axios report stating that the Florida congressmen would leave the House to pursue a television career, Gaetz was was found to be under investigation by the Department of Justice for allegedly taking part in a relationship with a 17-year-old girl. Gaetz has repeatedly denied the accusations brought against him.

In May, former Gaetz associate Joel Greenberg pleaded guilty to six federal crimes involving the sex trafficking of a child. Greenberg agreed to a plea deal, which a federal judge approved last week, and agreed to cooperate with police in the investigation.