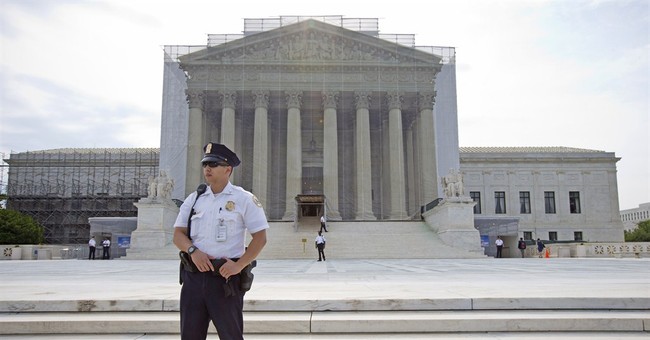 In a landmark 5-4 decision today, the Supreme Court struck down a section of the Voting Rights Act that designated that the Act applied only to certain parts of the United States. Chief Justice John Roberts wrote the majority opinion.

Section 5 of the VRA dictated that state and local governments in the United States would have to get approval from the federal Department of Justice to change their election laws. Section 4 of the VRA contains the formula that determined which parts of the United States that Section 5 applies to. It was Section 4 of the VRA that the Supreme Court struck down today, which means that Section 5 will go unenforced until Congress can come up with an alternative formula for determining which governments must receive approval for election law changes.

Notably, Chief Justice Roberts' opinion leaves the possibility that Congress can come up with a legally sound formula that would still limit the Section 5 requirements to only some parts of the United States - but that Section 4 is currently constitutionally unacceptable.

The Voting Rights Act of 1965 employed extraordinary measures to address an extraordinary problem. Section 5 of the Act required States to obtain federal permission before enacting any law related to voting—a drastic departure from basic principles of federalism. And §4 of the Act applied that requirement only to some States—an equally dramatic departure from the principle that all States enjoy equal sovereignty. This was strong medicine, but Congress determined it was needed to address entrenched racial discrimination in voting, “an insidious and pervasive evil which had been perpetuated in certain parts of our country through unremitting and ingenious defiance of the Constitution.” South Carolina v. Katzenbach, 383 U. S. 301, 309 (1966). As we explained in upholding the law, “exceptional conditions can justify legislative measures not otherwise appropriate.” Id., at 334. Reflecting the unprecedented nature of these measures, they were scheduled to expire after five years. See Voting Rights Act of 1965, §4(a), 79 Stat. 438.

Nearly 50 years later, they are still in effect; indeed, they have been made more stringent, and are now scheduled to last until 2031. There is no denying, however, that the conditions that originally justified these measures no longer characterize voting in the covered jurisdictions….

At the same time, voting discrimination still exists; no one doubts that. The question is whether the Act’s extraordinary measures, including its disparate treatment of the States, continue to satisfy constitutional requirements.

True the Vote President Catherine Engelbrecht said in a statement that "This is without doubt a step in the right direction for our Republic... the process of reigning in federal abuses begins with our election systems - today's decision serves as momentum in our favor."

A Heritage Foundation fact sheet on the Voting Rights Act listed out the exact problems with the coverage formula that affected Section 5:

Whether a jurisdiction is covered by Section 5 is based on 40-year-old data: registration or turnout below 50% in the 1964, 1968, or 1972 elections. Congress did not update this coverage formula when it reauthorized Section 5 in 2006.

The Supreme Court warned Congress in 2009 that the coverage formula was constitutionally questionable, but no changes have been proposed.

The Census Bureau report also demonstrates that blacks voted at substantially higher rates than whites in seven of the states covered by Section 5, which was a much better showing than many noncovered states in other parts of the country.

Progressives have been hyperventilating that this is the end of modern liberal democracy and that minority groups will be relegated to a pre-civil rights era of second-class status. MSNBC host Melissa Harris-Perry, for example, tweeted:

Damn, that citizenship thing was so great for awhile.

Don't believe the hype. It's been documented that parts of the Voting Rights Act have actually harmed minority political candidates by limiting their influence to "majority-minority" districts - and that Democratic minority candidates have been hurt more than Republicans. As Aaron Blake documents at the Washington Post:

While the law mandates so-called “majority-minority” districts mostly in the South, the practice of packing congressional districts with minorities — whether black or Hispanic — has become the standard across the country. Minority groups like the idea because it virtually guarantees the election of minority candidates, and Republicans like it because it packs as many traditionally Democratic voters into as few districts as possible, leaving more Republican-leaning districts nearby. (That’s is a big reason the GOP has a clear advantage in a majority of congressional districts these days.)

Again, none of this prohibits Congress from coming up with new coverage requirements to determine which jurisdictions should be subject to the VRA's Section 5.

The opinion of the Court is below: