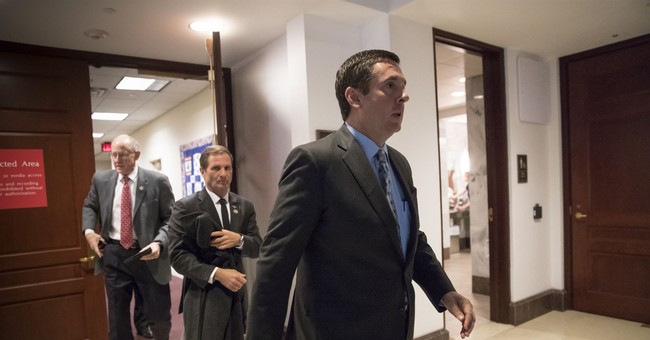 The Department of Justice and the FBI would love to see Republicans lose in the fall, Rep. Devin Nunes (R-CA) said on Fox News Wednesday night.

“I have to believe that the Department of Justice and the FBI, the people at the leadership, they are banking on a loss by the Republicans in the fall...because if the Democrats take control, they are going to drop all of this investigation," Nunes told Fox New's Sean Hannity Wednesday night, reported CNS News.

The Department of Justice is still dragging its feet on delivering the documents requested by the House Intelligence Committee, pulling one of the oldest tricks in the book, according to the congressman.

“It's the oldest trick in the book. So, many of the bureaucracies here in Washington know how to wait out Congress. They know to try to plan meetings on a Friday when they know there's not votes, or on a Monday when there's not votes -- that's the time that they want to get things -- they wait,” said Rep. Nunes.

The representative explained that the Department of Justice continues to delay the submission of documents because they know Congress will be adjourning next week. However, Nunes said that Republican-led committees will continue to investigate through the summer, despite the adjournment.

“And I think they'd love to see Republicans lose. And I say that, I don't want --I hate to say that, but I have to believe that the Department of Justice and the FBI, the people at the leadership, they are banking on a loss by the Republicans in the fall,” said the congressman.

In a letter Rep. Nunes sent on July 5th to Reps. Trey Gowdy and Bob Goodlatte, chairmen of the House Oversight Committee and House Judiciary Committees, respectively, Nunes referenced an additional 15 potential witnesses “who may have relevant information.”

The congressman has referred a total of 42 people to the House Oversight and Judiciary Committees for questioning.