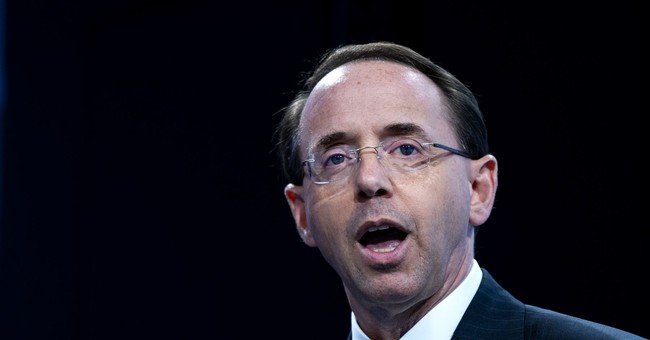 "Are you expecting to question Rod Rosenstein, your committee, in the coming week or any time soon, public or private?" Bartiromo asked Goodlatte when he appeared on her show.

Wray testified last week before the Senate Judiciary Committee along with Department of Justice IG Michael Horowitz. Rosenstein has not testified for several months.

“He’s a witness. Should he be recusing himself from all of this?” Bartiromo asked.

"Well, he certainly is responsible for the oversight of these investigations, the Mueller investigation, and everything that's gone on with regard to the production of documents for our investigation.

He is a witness. But he is also a key person. We need to bring him before the Judiciary Committee to question him regarding these matters. We're working very closely with him and with Director Wray to get that accomplished.

And it could happen as soon as this week. But we want to make sure that we get the answers to our questions about a whole host of things, from the discovery matters, to the questions about who it is in the Department of Justice and the FBI that may not be cooperating, and why the document production has been slow.

We have questions regarding his view of the inspector general's report, what changes are being made in the FBI to assure that these problems don't persist in the future, what personnel changes have been made and need to be made. Lots and lots of questions. And we're looking forward to talking to him very soon,” responded Goodlatte.

Additionally, Peter Strozk will testify behind closed doors this Wednesday in response to a subpoena from the Judiciary committee.

“The Department of Justice response to a document deadline, while the Judiciary Committee gets ready to grill Peter Strzok and possibly Rod Rosenstein in the coming days. Also, President Trump urging the GOP to hold off on immigration until after the midterm elections, as the House is scheduled to vote on the matter this upcoming week,” reported Fox News yesterday.

Goodlatte said that the subpoena was issued, despite the fact that Strozk said he would voluntarily appear before the committee to testify, but "it became apparent that he wasn't committing to the time and place that we had thought we had agreed upon."

The fact that FBI informants may have reached out to Trump campaign officials prior to the launching of the Trump-Russia probe is “deeply disturbing” Goodlatte said.

"The inspector general has launched a new investigation into that second matter. That's going to take him a long time. We're not waiting. And we're conducting that investigation ourselves in the meantime" said Goodlatte.