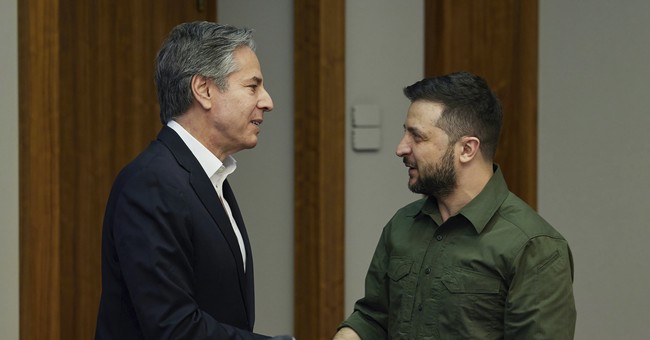 Secretary of State Antony Blinken announced Wednesday afternoon that the State Department will reopen the United States Embassy in Kyiv after closing it earlier this year.

"Three months ago, we lowered our flag over the U.S. Embassy in Kyiv, Ukraine, just days before Russian forces streamed across Ukraine’s border to carry out President Putin’s unprovoked, unjustified war of choice. When we suspended operations at the embassy, we made the point clear: while we would relocate U.S. embassy personnel for their safety and security, this would in no way prevent our engagement with, and support for, the Ukrainian people, government, and civil society as well as our allies and partners. We underscored our commitment to Ukraine’s sovereignty and territorial integrity, pledged to continue our assistance, and started working toward the day we could return to Kyiv," Blinken released in a statement.

The Stars and Stripes fly again over Embassy Kyiv. I can announce that we have officially resumed Embassy operations in Ukraine’s capital. We stand proudly with the government and people of Ukraine as they bravely defend their country from Putin’s brutal invasion. Slava Ukraini! pic.twitter.com/lGRdzqbVbG

"Now, that day has come. Today we are officially resuming operations at the U.S. Embassy in Kyiv. The Ukrainian people, with our security assistance, have defended their homeland in the face of Russia’s unconscionable invasion, and, as a result, the Stars and Stripes are flying over the Embassy once again. We stand proudly with, and continue to support, the government and people of Ukraine as they defend their country from the Kremlin’s brutal war of aggression," he continued. "As we take this momentous step, we have put forward additional measures to increase the safety of our colleagues who are returning to Kyiv and have enhanced our security measures and protocols...With strength of purpose, we reaffirm our commitment to the people and government of Ukraine, and we look forward to carrying out our mission from the U.S. Embassy in Kyiv."

Meanwhile, Finland and Sweden are set to join NATO.

U.S. National Security Advisor Jake Sullivan says he is confident that Finland and Sweden will have effective NATO accession process and adds that the United States is talking with Turkey to facilitate this process https://t.co/ulhNi41vSm