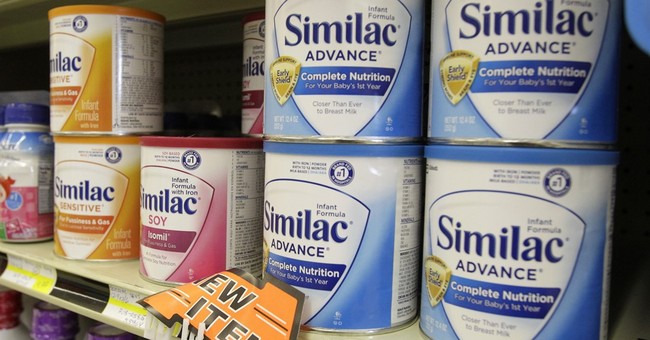 Speaking to reporters from the White House Monday, Press Secretary Karine Jean-Pierre was asked when the Biden administration expects the nationwide baby formula shortage to end. Jean-Pierre insisted the administration is working "quickly" to resolve the problem, prompted by the FDA shut down of Abbott in February, but could not give a timeline for when officials expect the crisis will be over.

REPORTER: The baby formula shortage "doesn't seem like a situation that would have required mind-reading...Are there specific actions that this administration took...in February or any earlier?"

KJP: "You've seen my colleagues on your networks...We've been working on this 24/7." pic.twitter.com/TMmet0C5nF

News broke after the briefing that Abbott, which produces nearly 50 percent of the country's baby formula, has reached a deal with regulators to restart a closed Michigan plant. The company said it will take at least eight weeks to get formula produced and back into stores.

"Abbott has agreed to enter into a consent decree with the U.S. Food and Drug Administration (FDA) related to its Sturgis, Mich., infant formula plant. The decree is an agreement between FDA and Abbott on the steps necessary to resume production and maintain the facility. This does not affect any other Abbott plant or operation. The decree is subject to court approval," Abbott released in a statement Monday afternoon. "After FDA approval, Abbott could restart the site within two weeks; from the time of restart it would take six to eight weeks before product is available on shelves. Abbott will continue to import formula from FDA-registered facility in Ireland to help alleviate near-term supply shortage. CDC concluded its investigation with no findings of a link between Abbott formulas and infant illnesses."

"Our number one priority is getting infants and families the high-quality formulas they need, and this is a major step toward re-opening our Sturgis facility so we can ease the nationwide formula shortage. We look forward to working with the FDA to quickly and safely re-open the facility," Abbott Chairman and Chief Executive Officer Robert Ford said. "We know millions of parents and caregivers depend on us and we're deeply sorry that our voluntary recall worsened the nationwide formula shortage. We will work hard to re-earn the trust that moms, dads and caregivers have placed in our formulas for more than 50 years."

Meanwhile, the crisis keeps getting worse by the hour as panicked parents face empty store shelves.

A photo my dad took today of the baby formula aisle at a Target in northern Virginia.

As a mom, I can’t imagine the panic and stress parents are feeling as they navigate this critical shortage and worry about just being able to feed their infants. pic.twitter.com/saVqrEO1ME

This Texas mom says she's "devastated" amid the massive shortage of baby formula.

"I don't know what to do. I was crying right now in Target." pic.twitter.com/oLggk1nKrY

Palettes of baby formula have been purchased by the federal government for use at detention centers along the U.S. southern border.

The first photo is from this morning at the Ursula Processing Center at the U.S. border. Shelves and pallets packed with baby formula.

The second is from a shelf right here at home. Formula is scarce.