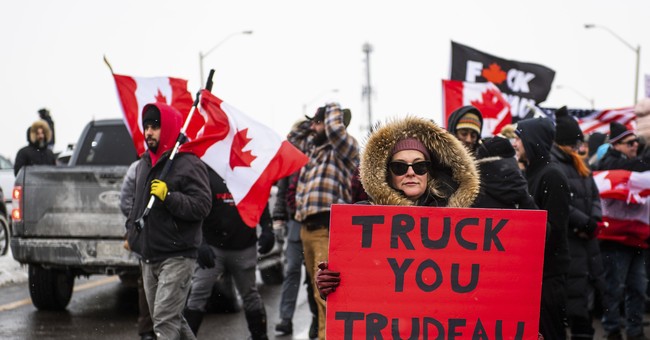 At the direction of Canadian Dictator Justin Trudeau Thursday night the founders and organizers of the trucker Freedom Convoy were arrested by authorities.

Tamara Lich has been charged with:
*counselling to commit mischief

Despite the arrests, the convoy is vowing to hold the line in Ottowa. They plan to continue their peaceful protest against vaccine mandates and other Wuhan coronavirus restrictions.

Tamara Lich has been arrested, but we will continue to #holdtheline pic.twitter.com/GaPZdsrhVe

Meanwhile, the Canadian Civil Liberties Association is suing over Trudeau's efforts to stop peaceful protests and the government’s seizure of private bank accounts.

#BREAKING The Canadian Civil Liberties Association taking federal government to court over the invoking of Emergencies Act to deal with convoy protests in Ottawa@cancivlib https://t.co/t701jbXy7G. pic.twitter.com/QJ19LFy3qX