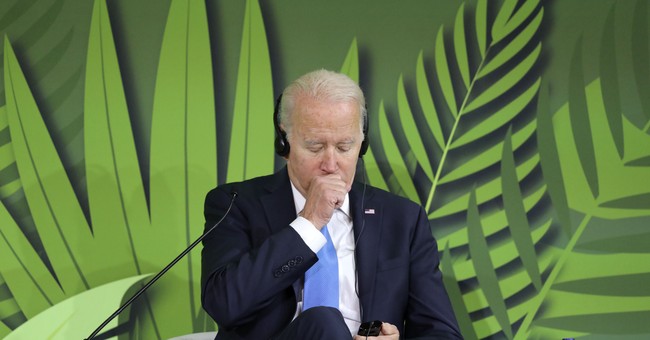 During remarks at the White House Friday morning, President Joe Biden appeared to be ill while he spoke about the latest jobs numbers. His voice was hoarse and he repeatedly coughed into his hand after taking a break from speaking.

His appearance sparked speculation about an illness, which he insisted was just a cold.

Joe Biden is asked why he sounds so sick:

"I have a 1 & 1/2-year-old grandson who has a cold who likes to kiss his pop. He'd be kissing my, anyway...But it’s just a cold." pic.twitter.com/rZPbYNBBAc

Memorandum from Kevin C. O’Connor physician to the president

1. The following is released with permission of the patient

2. As is readily apparent, President Biden is experiencing some increased nasal congestion this week. This can be heard in his voice and he is feeling the colloquially well-known “frog in ones throat.”

3. Investigation has included a comprehensive respiratory panel which includes 19 common respiratory pathogens, to include COVID-19, other coronaviruses, influenza, streptococcus, tol name a few… All of these tests were negative. Including the above, he has been tested for COVID-19 three times this week.

4. Treatment will include common over the counter medications for symptoms.

A number White House press corps members, who are required to be vaccinated, have tested positive for Wuhan coronavirus in recent days.

"We’re writing to let you know that a member of Monday’s in-town pool received a positive test result for COVID-19 this morning, following mild symptoms that began on Wednesday.  Because this individual developed symptoms within 48 hours of being in the briefing room Monday, we are sending this advisory.  This individual has not been on campus since Monday," the White House Correspondents Association emailed Friday. "We expect the White House Medical Unit to reach out to anyone who is deemed by that office to be a close contact, to provide guidance based on vaccination status. It is important to reiterate our policy on indoor masking at the White House. Masks are required at all times in public indoor spaces."