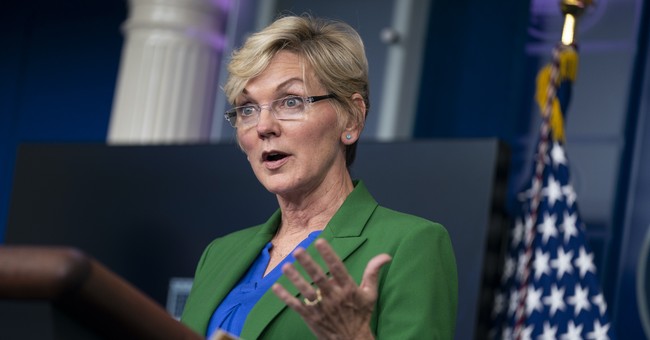 Speaking to reporters at the White House Tuesday afternoon, Department of Energy Secretary Jennifer Granholm was asked how many barrels of oil Americans consume and need each day. She claimed she didn't have the answer.

REPORTER: "How many barrels of oil does the U.S. consume per day?"

Energy Sec. Granholm: "I don't have that number in front of me. I'm sorry." pic.twitter.com/lToOjsLNLu

The answer is 18 million barrels, which exposes President Biden's move to release 50 million barrels from the Strategic Petroleum Reserve as a futile, political move.

How does Energy Secretary Jennifer Granholm not know how many barrels of oil the U.S. uses per day? Or even have an estimate?

That seems like an important fact to know when briefing on the impact of releasing barrels from the Strategic Petroleum Reserve.

The Energy Dept, where Sec. Granholm is the Secretary, estimates that in 2020 the US consumed avg of about 18.19 million barrels of petroleum per day.

She wouldn't want to say that though, bc it would show Biden admin's SPR announcement is a meaningless comms play. https://t.co/u01hRfpNsK

In recent weeks, Granholm laughed off riding energy prices and admitted during remarks this week that the United States is in the middle of a "transition" away from oil and gas, which is causing pain at the pump.

Biden Energy Secretary Jennifer Granholm: "We're working through an energy transition. And we’ve got to start by adding energy, and the reality is, we have to take some time to get off of oil and gas, we recognize this. This is a transition."

Share this on Facebook
Tweet
Oh, So That's Why Chris Cuomo Was Able to Hang Around For So Long at CNN
Matt Vespa
China Threatens 'Firm Countermeasures' as White House Announces Diplomatic Boycott of Beijing Olympics
Spencer Brown