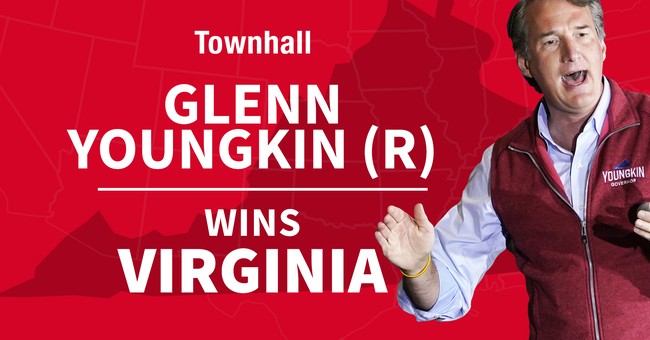 Joe Biden arrives back in the U.S. as Virginia Governor Elect Glenn Youngkin is giving his victory speech. pic.twitter.com/CpvMir2ZFO

Lieutenant Governor Elect Winsome Sears: "There are some who want to divide us and we must not let that happen. They would like us to believe we are back in 1963 when my father came...In case you haven’t noticed, I am black, and I have been black all my life." pic.twitter.com/NoJJc6qxBe

UPDATE: Republicans are running the table in Virginia. They've swept the executive offices and are flipping legislature seats. "It's a Bloodbath."

Larry Sabato: "It's a bloodbath." pic.twitter.com/baLJlcr74D

According to the AP, Republicans have flipped Virginia HD-28. @ChazNuttycombe has also called HD-12 and HD-75 for the GOP. Republicans are halfway to the majority, and things look good for them in HD-02, HD-72, HD-83, HD-93...

Before the race was called, McAuliffe indicated he was going to lose. He watched results from his home and didn't show up to his Election Night party.

McAuliffe statement "win or lose" — apparently he's at home with his family and not at or planning to attend his campaign's election night rally? https://t.co/RZE2WQFTRC

In addition, Republicans are sweeping the ballot.

As for early votes that needed to be rescanned in the Democrat stronghold of Fairfax County, both parties reportedly signed off on a memory card switch, which delayed the vote count and tally.

Folks, heard from a TOP GOP lawyer in VA tonight that the Fairfax County thing had to do with an out of date/defective memory card. Both sides signed off on re-scan &it was witnessed by GOP lawyers in the room the whole time. Ain't over till its over, but looks good for Youngkin!

This is a breaking story. Stay tuned for updates.