Is This Why Biden Finally Lifted the Ban on Travel From Europe? 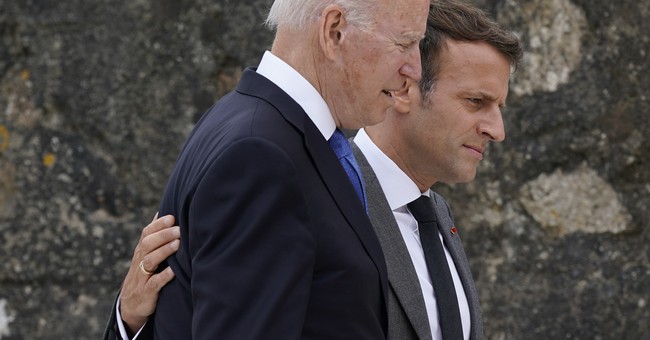 As Spencer reported, the Biden administration has finally lifted the ban on travel from European countries to the U.S. for individuals who are fully vaccinated against Wuhan coronavirus.

"This new system allows us to implement strict protocols to prevent the spread of COVID from passengers flying internationally into the United States by requiring adult foreign nationals traveling to the United States be fully vaccinated. It's based on public health. It requires fully vaccinated individuals. And so this is based on individuals rather than a country-based approach, so it is a strong system," White House COVID-19 Response Coordinator Jeff Zients released in a statement Monday morning.

But was it a science based decision? Or a way for President Biden to tamp down rage from the French?

??On timing of Biden admin decision to allow vaccinated travelers in from November, a non-admin foreign policy expert says:
“Pretty sure this wouldn’t have happened we’re it not for the crisis with France. All the signals I got up to late last week were no imminent change.” 1/

“They had to do something to try to change the dynamic with Europe,” the expert in touch with admin said. “Words don’t matter and are even counterproductive— they had to act and this was low hanging fruit.” 2/

The French government is livid after being frozen out of a new nuclear submarine deal between the U.S., the UK and Australia. Last week French Ambassador the U.S. Philippe Étienne was recalled in protest.

[1 of 3]: We have been in close contact with our French allies. We understand their position, and we are aware of their plans to recall Ambassador Etienne to Paris for consultations. France is a vital partner & our oldest ally, and we place the highest value on our relationship. pic.twitter.com/xLci8Y8V6V