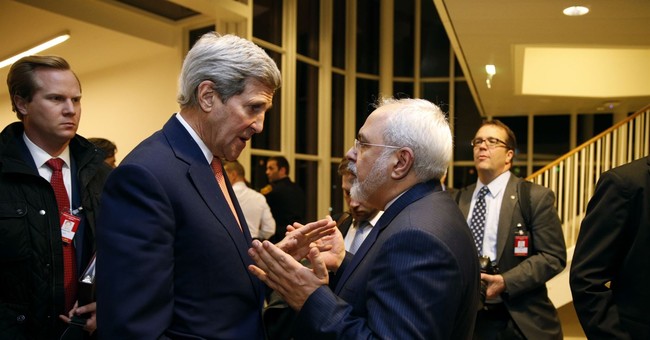 "I know you're not under oath but we've seen many administration officials come to this Congress and lie straight faced to members of Congress. You're saying for the record that that never occurred," Congressman Scott Perry asked. "There's reason for suspicion."

"On no occasion, never," Kerry said about sharing classified information with Iran. "I'm just telling you, that didn't happen. End of story."

Congressman Lee Zeldin also went after Kerry on the issue, during which the former Secretary has a hard time "recalling" who he met with and when.

Kerry has repeatedly denied the allegations, but his long record of meeting with Zarif and audio first reported by the Washington Free Beacon tells a different story.

Leaked audiotape of Iranian foreign minister Javad Zarif indicates he had no knowledge of covert Israeli military strikes before former secretary of state John Kerry provided him with the information, new details that contradict the State Department's recent defense of Kerry.

These details are likely to further fuel calls from leading Republicans for Kerry's firing or resignation. The New York Times reported that Zarif said on the tape that Kerry told him Israel launched 200 airstrikes against Iranian interests in Syria. The Times did not provide further details on that issue. But an independent translation of the audiotape commissioned by the Washington Free Beacon shows that Zarif went on to clarify that he had no prior knowledge of these Israeli strikes before Kerry told him.

A number of lawmakers have asked the White House to directly review Kerry's security clearance.