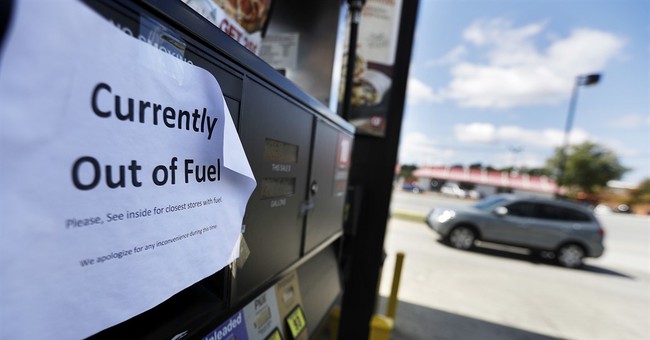 Former White House Economic Advisor Larry Kudlow is warning if the Colonial Pipeline system isn't back up by Friday, "all bloody hell will break loose."

Larry Kudlow: "If Continental can't get back into business by Friday, experts tell me all bloody hell is gonna break loose. You're talking about the electric grid, no supplies in gasoline stations, schools, banks, law firms & office bldgs. They basically have until Friday." ?? pic.twitter.com/T94cmiBzr8

As a result of a Russian-backed cyberattack on Colonial, gas shortages and long lines are prevalent in nearly two dozen states. In Atlanta, more than half of the gas stations are empty. The same situation is playing out in Charlotte.

Nearly 60% of gas stations in metro Atlanta are without gasoline, but that number has held steady since 1am or so.

BREAKING: 71% of stations in metro Charlotte are without gasoline.

White House officials will brief Members of Congress about the cyberattack on Colonial Pipeline *tonight* at 6pm..... as local news in their Congressional districts lead news with gas lines

"Last night, Homeland Security Advisor Liz Sherwood-Randall and National Economic Council Director Brian Deese convened the inter-agency principals leading the administration’s whole of government response to the Colonial Pipeline incident. The group discussed the latest updates on fuel supply in the affected region, and steps that agencies have taken and are considering to further alleviate the supply shortages," Psaki said. "The Department of Transportation announced last night that they are allowing Alabama, Georgia, Kentucky, Louisiana, Maryland, Mississippi, New Jersey, North Carolina, Tennessee and Virginia to use Interstate highways in their State to transport overweight loads of gasoline and other fuels, under existing disaster declarations. And, the Environmental Protection Agency issued a second emergency fuel waiver expanding on a waiver that EPA issued yesterday morning for the District of Columbia and areas of Maryland, Pennsylvania and Virginia. The second waiver waives the requirements for low volatility conventional gasoline and Reformulated Gasoline (RFG) for the District of Columbia and areas of Maryland, Pennsylvania and Virginia, and also includes Alabama, Delaware, Georgia, Specific Counties of Florida, Louisiana, Mississippi, North Carolina, South Carolina, and Tennessee."

"DOT’s Maritime Administration concluded their assessment of what assets are available in the Jones Act fleet to carry petroleum products within the Gulf, and from the Gulf up the Eastern Seaboard. The Department of Homeland Security stands ready to review any temporary Jones Act waiver requests from companies that demonstrate there is not sufficient capacity on Jones Act-qualified vessels to carry fuel to the affected region," she continued.