Biden: I Don't Have Any of the Facts on Colorado, But We Definitely Need a Gun Ban 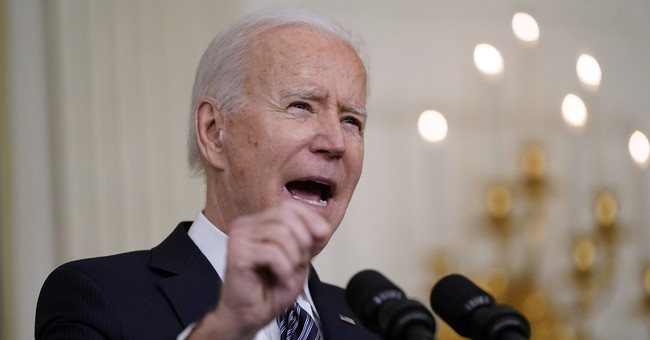 “The way that he sees it is that there a number of levers that any president of the United States can use," Psaki told reporters. "Including working through legislation, including executive action...there’s an ongoing process and I think we feel we have to work on multiple levels at the same time.”

Speaking from the White House Tuesday afternoon, President Joe Biden admitted he doesn't know or have all of the facts about the shooting that took place in Boulder, Colorado Monday night. Regardless, he called for additional infringement on the Second Amendment rights of law abiding Americans.

"I want to be very clear. This is the one thing I do know enough to say on in terms of what's happened there. While we are still waiting for more information regarding the shooter, his motive, the weapons he used, the guns, the magazines, the weapons, the modifications that apparently have taken place with those weapons involved here, I don't need to wait another minute, let alone an hour, to take common sense steps to save lives in the future and to urge my colleagues in the House and Senate to act," Biden said. "We can ban assault weapons and high capacity magazines in this country once again. I got that done when I was a Senator. It passed, it was the law for the longest time...we should do it again."

"I'll have much more to say as we learn more but I wanted to be clear," he continued.

Yeah, the FB posts that are floating around seem to indicate that. Lots of stuff about tapped phones, people following him. https://t.co/TOdSbU6iDG

During a Senate Judiciary Committee hearing Tuesday morning, a number of witnesses advocated against additional gun control, arguing it eliminates the ability for minorities, persecuted groups and everyday citizens to properly defend themselves from violence.

Every time there is a shooting Democrats propose going after law-abiding citizens & their #2A rights.

Let’s target the bad guys, put them in jail, and stop them from getting guns.