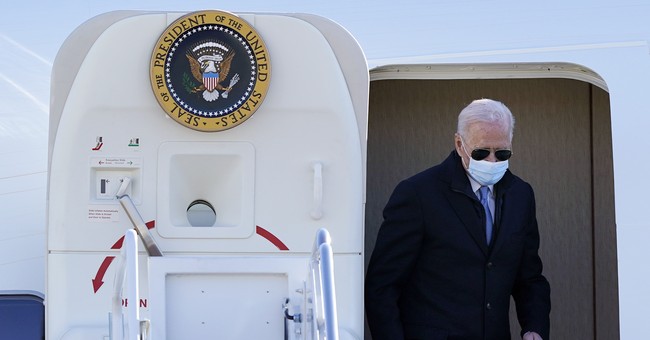 The White House is saying President Joe Biden is "doing fine" after he fell multiple times while attempting to board Air Force One Friday. Once the flight took off, bound for Georgia, Deputy Press Secretary Karine Jean-Pierre answer questions from reporters and was asked about his status.

From the White House pool report:

Q: We saw the president take a fall on the stairs, is he doing okay.?

KJP: It's pretty windy outside, it's very windy. I almost fell coming up the steps myself, he is doing a hundred percent fine.

Q: Did he hurt his foot that was recently broken at all?

KJP: All I can tell you he's doing fine. He's preparing for the trip today, and he is he's doing just great.

Q: Did he get checked out by the doctor?

KJP: All I know is, all I can tell you is he's doing fine. He's doing great.

President Biden stumbled and recovered as he climbed aboard Air Force One on his way to Georgia pic.twitter.com/92N05Ukcvk

Biden fractured his foot in December while playing with his dog at his home in Delaware. His falls today have prompted a number of questions, many of which he likely won't be asked about.

Biden previously bragged about his ability to climb stairs. So it’s fair game. Someone should ask him about this at his press conference. pic.twitter.com/HdGt7NzcIV

You certainly dished it out on Trump. https://t.co/7bE8hHfy4f