BREAKING: Pence Has Announced His Decision on Whether to Certify Electoral College Votes 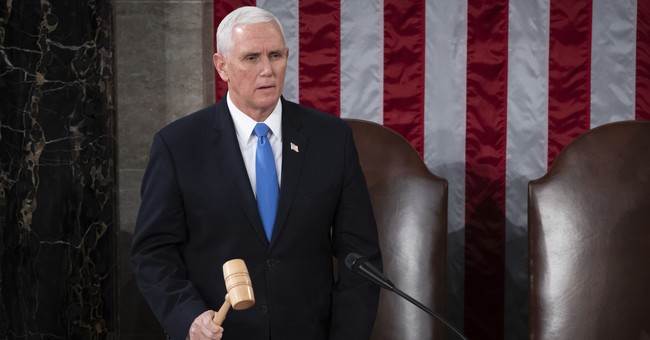 Former Vice President Mike Pence sent a letter to lawmakers on Capitol Hill Wednesday announcing he will not reject certified election results from the states and will confirm the 2020 Electoral College votes.

"It is my considered judgment that my oath to support and defend the Constitution constrains me from claiming unilateral authority to determine which electoral votes should be counted and which should not," Pence wrote. "After an election with signifiant allegations of voting irregularities and numerous instances of officials setting aside state election law, I share the concerns of millions of Americans about the integrity of this election. The American people chose the American President, and have every right under the law to demand free and fair elections and a full investigation of electoral misconduct. As presiding officer, I will do my duty to ensure these concerns receive a fair and open hearing in the Congress of the United States. Objections will be heard, evidence will be presented, and the elected representatives of the American people will make their decision."

The letter came as President Donald Trump spoke to thousands of supporters on the Elipse in Washington D.C. and said he would be "very disappointed" if Pence "didn't come through" to reject the results.

Pence will oversee a joint session of Congress Wednesday afternoon. At least 140 Republican House members and 14 Senators will object to the certification of the results.

You can watch live coverage and developments from the session here.