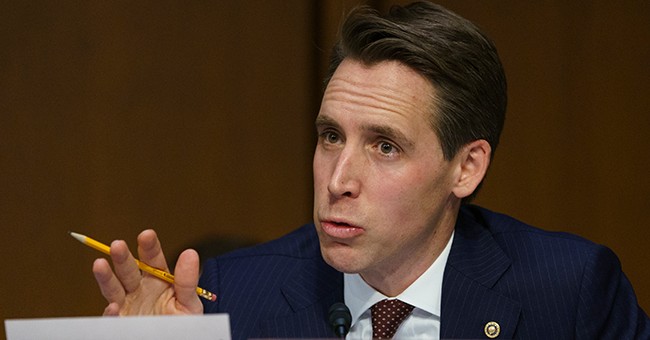 Republican Senator Josh Hawley, who announced earlier this week he will object to the certification of the 2020 presidential election during a joint session of Congress on Wednesday, has revealed disturbing news about his family.

Tonight while I was in Missouri, Antifa scumbags came to our place in DC and threatened my wife and newborn daughter, who can’t travel. They screamed threats, vandalized, and tried to pound open our door. Let me be clear: My family & I will not be intimidated by leftwing violence

This was no candlelight vigil, this was an attempt to terrorize @HawleyMO’s family, his wife & kids, and neighbors, you made that very clear.

This is what those leftist socialist anarchists want to do to this country, tomorrow Georgia gets a chance to reject them! https://t.co/9SQxe6bHlG pic.twitter.com/MBTsBRIeSf

And didn’t have the guts to do it in daylight, but only under cover of darkness so you could hide. You’re scum. And we won’t be intimidated

Shortly before the incident, Hawley explained his decision to object during an interview with Fox News.

"This is about the integrity of our elections and I this is about taking a stand where you can take a stand," Hawley said. "I suppose you can say 'nothing I do will matter. It won't matter if I object or not so I'll sit by and do nothing.' I mean, that's one approach, but I can tell you the people of my state they won't understand that and they shouldn't. They say, 'You have the opportunity to stand up and be heard and to object. You have the opportunity to try and force change and you should.' And that's what I'm going to do."

#January6 is my opportunity to speak for my constituents and to force a debate on election integrity, and that’s exactly what I’m going to do pic.twitter.com/Fjb4oGlmyk