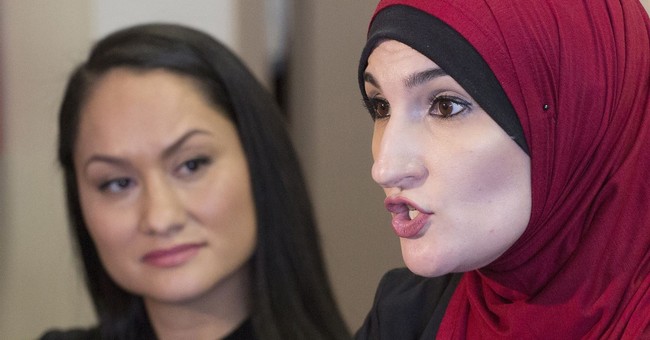 In case you need a reminder of who Sarsour is, here's a refresher:

Linda Sarsour, the woman who said “Israel is built on the idea that Jews are supreme to everyone else,” who openly fundraised for a terrorist who killed a Jewish American in Israel, who openly spreads vile antisemitism, is an official speaker at @JoeBiden’s Democratic convention. pic.twitter.com/oUjCHyC7Px

After her appearance, the DNC was called out for including her in official programming. The Biden team is attempting to do damage control by claiming she has nothing to do with the campaign.

“... She has no role in the Biden campaign whatsoever."

A Dem official says this was a meeting of Muslim delegates to the convention room and not run by the DNC or the Biden campaign.

But you can't separate the campaign from the DNC convention. They work together and the DNC approved her appearance. Her participation in a DNC sanctioned meeting has the logo all over it and was on the official schedule.

"Not run by the DNC or the Biden campaign"?!?

??was announced by the DNC
??is on the DNC convention schedule
??was livestreamed on the convention website
??featured DNC delegates https://t.co/2M1a0HAO9W pic.twitter.com/7CsBsNd7Rg

This livestream was "not run by the DNC"? https://t.co/v7Z9nTJj86 pic.twitter.com/BuAbGLusYw

The Biden campaign and DNC continue to downplay the far left radicalism in the Democrat Party and yet, it's on full display at official convention events.