Pompeo: The Tide is Turning Against China 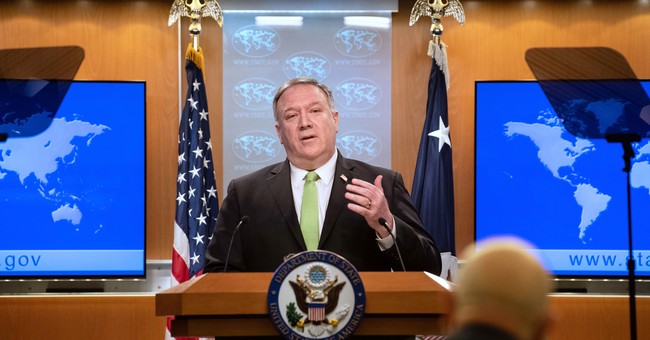 Speaking during testimony on Capitol Hill Thursday morning, Secretary of State Mike Pompeo told Senators on the Foreign Relations Committee that the tide is turning against the Chinese Communist Party and their antics.

"On China, we see the Chinese Communist Party also for what it is: the central threat of our times. Our vigorous diplomacy has helped lead an international awakening to the threat of the CCP.  Senators, the tide is turning," Pompeo said. "Thirty-plus countries and territories have become 5G 'Clean Countries,' banning untrusted vendors from their networks. When we talked about this some year ago, that number was in the single digits. In the Indo-Pacific, Australia declared China’s South China Sea claims unlawful and illegitimate, as have we. And we’re proud to have stepped up maritime maneuvers in that body of water alongside our friends from Australia and Japan and the United Kingdom."

"We’ve sanctioned Chinese leaders for their brutality in Xinjiang, imposed export controls on companies that support it, and warned U.S. businesses against using slave labor in their supply chains, he continued. "We’ve terminated special treatment agreements with Hong Kong in response to the CCP’s actions to deny freedom to the people of Hong Kong. And we closed our consulate in Houston because it was a den of spies."

Secretary of State Mike Pompeo said the ‘tide is turning’ in U.S. dealings with China, saying there is international support for American policies https://t.co/cZ705HmNtm pic.twitter.com/bwfk9g25z5

In recent months the United States and western allies have turned up the pressure on China, especially in the wake of Wuhan coronavirus -- a deadly pandemic the CCP unleashed on the world with lies, deception and coverups.