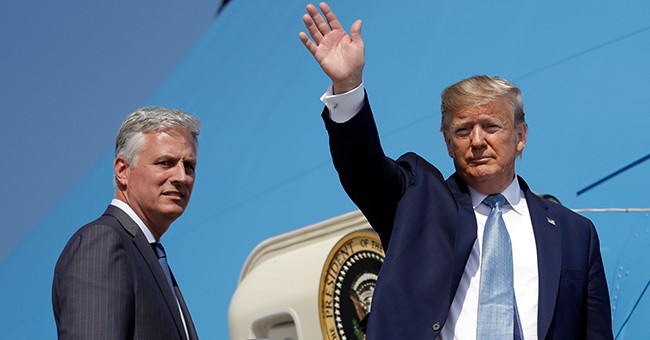 White House National Security Advisor Robert O'Brien has tested positive for Wuhan coronavirus after coming down with mild symptoms. He is 54-years-old and in general good health. According to the White House, he is self-isolating and did not expose either President Trump or Vice President Mike Pence.

Scoop: Robert O’Brien has been diagnosed with covid-19. He apparently contracted the coronavirus at a family event. He's been isolating at home but still doing work remotely, I'm told.

O'Brien recently returned from a trip to Europe where he represented the Trump administration at scaled down Bastille Day events.

Over the past few months a number of White House staffers have tested positive for the disease, including Pence Press Secretary Katie Miller and a Marine assigned to President Trump's helicopter squadron. Staffers are tested multiple times per week. A number of Secret Service agents have also tested positive.

In May President Trump revealed he had in fact been taking hydroxychloroquine as a precaution.

The President took the drug for two weeks and is no longer using it. A number of studies have shown the drug is effective against the disease.