EXCLUSIVE: From Saudi Arabia, Pompeo Warns About Consequences of Cowering to Iran 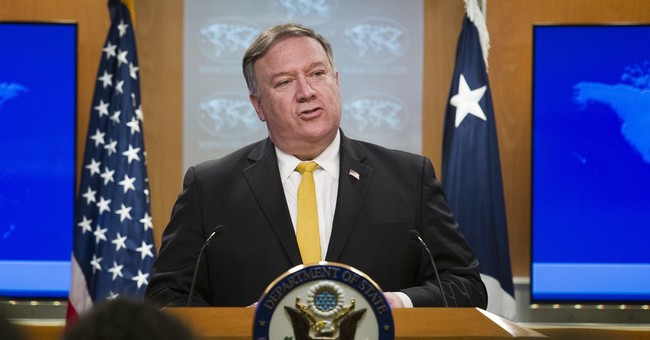 RIYADH, Saudi Arabia - Fresh off a visit to Prince Sultan Airbase and a series of meetings with Saudi officials this week, Secretary of State Mike Pompeo is touting continued U.S. leadership in the region against Iran.

In his first visit to the Middle East since Iranian Islamic Revolutionary Guard Corps General Qasem Soleimani was taken off the battlefield, Pompeo bolstered coalition relationships and future deterrence against the terrorist regime.

“The leaders in this region fundamentally understand that Qasem Soleimani was a terrorist who killed not only the hundreds of Americans that we know about but thousands of their own people as well. They are deeply grateful for the action President Trump did to take this horrible human being, who was at the center of so much of the mayhem in the region,” Pompeo told Townhall in an interview. “They’re thankful for what we did.”

“They appreciate America’s ability to support the deterrence posture that we have and they understand that if we cower, if we shrink back from the Iranian imperialism, from this theocratic revolutionary regime, that life for ordinary people, whether that’s in Jordan or in Bahrain or here in Saudi Arabia, or in the Emirates, will be worse off," he continued. "They’re thankful for our presence, for our support and the work that we’re all doing as part of this coalition whether that’s in the Strait of Hormuz or in Europe or right here on the ground.”

On Thursday, the State Department announced new sanctions on five Iranian election officials for rigging results and ordering violence against its citizens for more than four decades.

“I am announcing that the United States is sanctioning five senior regime officials under Executive Order 13876. The five officials being designated today have denied the Iranian people free and fair parliamentary elections," Special Representative for Iran Brian Hook announced from the State Department.

“The council denied more than 7,000 candidates the right to participate in the election. They also disqualified 90 sitting members of Iran’s parliament for running for re-election,” Hook continued. “The chairman of the Guardian Council is Ahmad Jannati. He is a 92-year-old cleric. He joined the council in 1980 and became chairman in 1988. So for the last 40 years, he has been busy deciding whom Iranians get to vote for. And in 2010, when Iranians protested his sham election, Jannati praised the regime for executing protestors. He urged more executions until the protests stopped.”

The Iranian regime regularly purges officials it does not view as extreme enough, yet portrays to the world that the government is made up of moderates who can be trusted with a nuclear program.

When asked if the idea of a “moderate” Iranian regime official was simply a myth, Pompeo said, “There’s no such thing.”

“The Islamic Republic of Iran is led by the Ayatollah Khamenei, who calls the shots there, and while Rouhani and Zarif run around the world in beautiful suits and speak English, the truth of the matter is the decision making occurs in a place that is very different than that,” Pompeo told Townhall. “You can see it, you can see it in the actions that harm the Iranian people. Whether it’s this collection of votes that will be rounded up today or the deprivation that has been foisted on the Iranian people over the past years, you can see the people of Iran have now had their patience sorely tested by a regime that has not been responsive to them but that has instead chosen to send forces all around the region to get young Iranians killed. Today the Iranians are leading an assault alongside the Syrians and the Russians, putting up to a million Syrians in the most terrible conditions.”

“This is the evilness of the regime in Iran and it’s the reason that President Trump has been so clear about the obligation we have to go after the problem of the Islamic Republic of Iran which is the fundamentally central destabilizing force in the region we’re sitting in right now,” he continued.

In the meantime, the United States continues its maximum pressure campaign against Iran's nuclear program and terrorism apparatus.

“This threat remains and the world, not just the United States, needs to maintain vigilance, deterrence, and pressure on the Iranian regime so that the people of Iran can ultimately be successful,” he said.