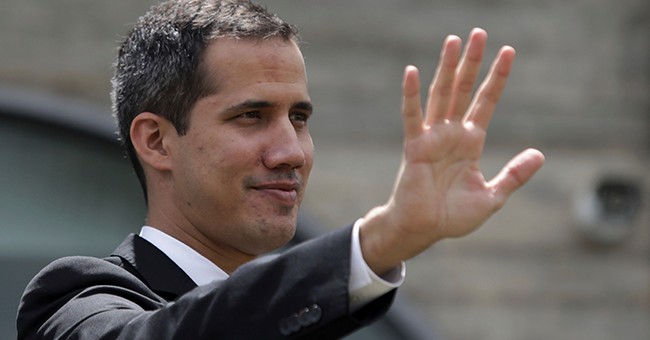 During his State of the Union address to the nation Tuesday night, President Donald Trump announced Venezuelan President Juan Guaido was in the chamber as a surprise guest.

"American leadership throughout the world, we are once again standing up for freedom in our hemisphere. That's why my administration reversed the failing policies of the previous administration on Cuba. We are supporting the hopes of Cubans, Nicaraguans, and Venezuelans to restore democracy.  The United States is leading a 59-nation diplomatic coalition against the socialist dictator of Venezuela, Nicolás Maduro. Maduro is an illegitimate ruler, a tyrant who brutalizes his people. But Maduro's grip on tyranny will be smashed and broken," Trump said.

"Here this evening is a very brave man who carries with him the hopes, dreams, and aspirations of all Venezuelans.  Joining us in the Gallery is the true and legitimate President of Venezuela, Juan Guaidó.  Mr. President, please take this message back to your homeland," he continued. "Please take this message back that all Americans are united with the Venezuelan people in their righteous struggle for freedom."

Pres Trump to meet this afternoon at the WH with Venezuelan opposition leader Juan Guaido, who was in the House Chamber Gallery last night and acknowledged by Pres Trump in his State of the Union Address. pic.twitter.com/FLAAVuvAdn

Today, President Trump will meet with Guaido at the White House. The leaders will participate in a bilateral meeting.

"Today, President Donald J. Trump will welcome Interim President Juan Guaido of the Bolivarian Republic of Venezuela to the White House. The visit is an opportunity to reaffirm the commitment of the United States to the people of Venezuela and to discuss how we can work with President Guaido to expedite a democratic transition in Venezuela that will end the ongoing crisis," the White House announced Wednesday morning. "We will continue to work with our partners in the region to confront the illegitimate dictatorship in Venezuela, and we will stand alongside the Venezuelan people to ensure a future that is democratic and prosperous."