Christians Celebrate the Birth of Jesus in Bethlehem 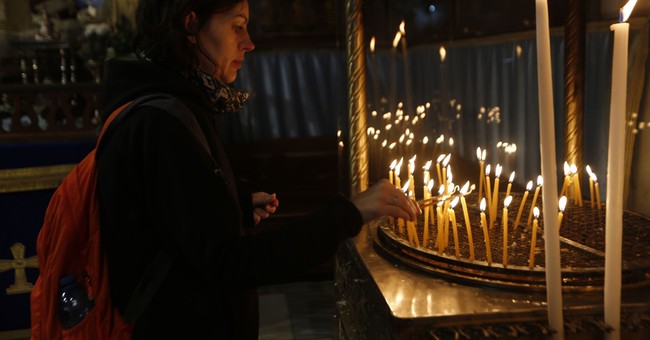 Christians celebrated the birth of Jesus in Bethlehem last night and attended a midnight mass at the Church of the Nativity. From the Associated Press:

Thousands of Christian pilgrims on Tuesday flocked to the West Bank town of Bethlehem, celebrating Christmas Eve in the traditional birthplace of Jesus.

Roger Hoagland, a Christian educator and missionary from Louisville, Kentucky, said he had come to lead a Baptist choir for a fourth time and described his visit as the experience of a lifetime.

Fox News correspondent Trey Yingst got a closer look at a piece of wood, a relic provided by the Vatican, from Jesus' crib.

The Pope’s Custodian to the Holy Land shows us a piece of the crib that Jesus is said to have laid in. pic.twitter.com/fVZXDdzCXj

Meanwhile, throughout the Middle East brave worshippers celebrated Christmas under threat of violence.

According to a number of studies, Christians are now the most persecuted religious group in the world. Further, the BBC reported earlier this year the dwindling number of Christians in the Middle East has reached "genocide levels."

The persecution of Christians in parts of the world is at near "genocide" levels, according to a report ordered by Foreign Secretary Jeremy Hunt.

The review, led by the Bishop of Truro the Right Reverend Philip Mounstephen, estimated that one in three people suffer from religious persecution.

Christians were the most persecuted religious group, it found.

Mr Hunt said he felt that "political correctness" had played a part in the issue not being confronted.

The interim report said the main impact of "genocidal acts against Christians is exodus" and that Christianity faced being "wiped out" from parts of the Middle East.

It warned the religion "is at risk of disappearing" in some parts of the world, pointing to figures which claimed Christians in Palestine represent less than 1.5% of the population, while in Iraq they had fallen from 1.5 million before 2003 to less than 120,000.

"Evidence shows not only the geographic spread of anti-Christian persecution, but also its increasing severity," the Bishop wrote.