Trump: People Are Finally Starting to Realize There's a Crisis at the Border...as I've Been Saying 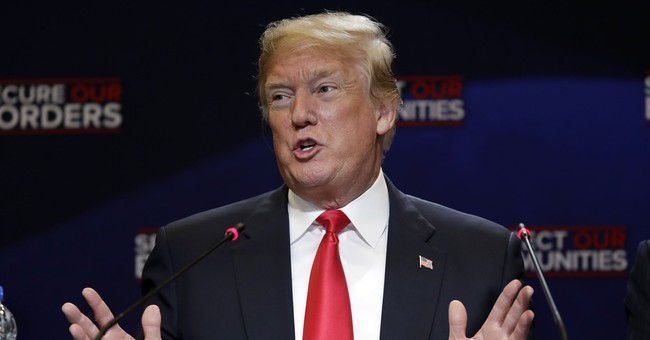 Speaking to reporters outside of the White House Wednesday before departing for the G20 in Japan, President Trump again called on Democrats to change weak asylum laws fueling the ongoing crisis on the southern border.

"I spoke with Nancy Pelosi and we had some conversations having to do with the bill for humanitarian aide at the border for the children.  We’re moving along very well with the bipartisan bill in the senate, spoke to a lot of people and we’re doing very well, we’re very far along," Trump said. "The House is getting it together with the Senate to get something done. It’s humanitarian aide it’s very important, and I think a lot of people are starting to realize I was right when I said there was a the crisis at the border, it wasn’t a manufactured crisis."

For months Democrats and their allies in the media have claimed there isn't a crisis at the border and that President Trump's description of the situation is overblown. In February, he officially declared a national emergency over the issue.

Earlier this month, Acting DHS Secretary Kevin McAleenan testified on Capitol Hill about the kind of resources and law changes Border Patrol and ICE agents need to get things under control.

"With a security and humanitarian crisis on America’s Southern Border that is growing worse by the day, DHS cannot properly protect America’s territory, enforce its immigration laws, and keep criminals from exploiting our system and taking advantage of American generosity without immediate action from Congress. While we are doing everything we can, the volume and composition of populations arriving at the Southern Border are simply unsustainable.  Unless Congress acts, the situation will continue to deteriorate—with grave consequences," he said.

"While we are doing everything we can to manage the crisis, managing the volume of vulnerable populations arriving is simply unsustainable. The facilities, resources, and legal authorities that we have at DHS are not able to address the challenges we are seeing and which we anticipate will continue without abatement absent Congressional action," he continued. "The increase in numbers along with changes in demographics are directly tied to the vulnerabilities in our legal framework that have become well known to smugglers and migrants."

While House Speaker Nancy Pelosi appears to be working toward a temporary humanitarian aid solution, earlier this week she said, "what's the point" while discussing the enforcement of U.S. immigration law.

How Did This Ever Get Published? NYT Video Takes a Blowtorch to Blue States
Townhall
'Tell us you're a racist elitist without saying you're a racist elitist': Ana Navarro DRAGGED for tweeting racist AF meme on Thanksgiving
Twitchy
Lincoln Project Founder's Choice for 2024 GOP Nominee Is 'Utterly Desperate' — No, Really
Redstate
Whose Land Did Native Americans Steal Before Europeans Stole It From Them?
PJ Media