New Border Apprehension Numbers Are In and They're Out of Control...Again 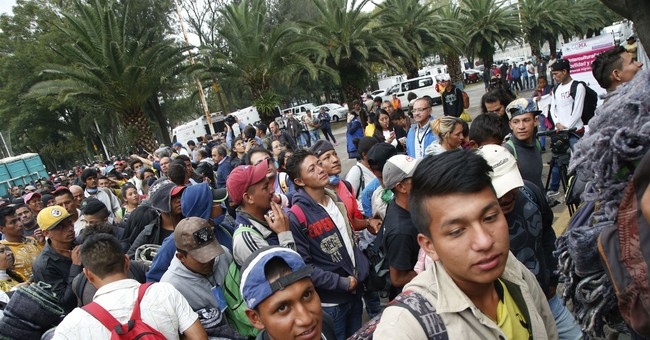 U.S. Customs and Border Protection released new detention numbers for May 2019 Wednesday afternoon. They exceed the previous month by more than 30 percent. It's the worst month on record so far this year, the third month in a row with over 100,000 detentions and the worst numbers in over a decade. The chart below says it all.

Fueling the humanitarian crisis, large groups and family units continue to make up the bulk of the influx. Detention centers are at full capacity, being described as "bursting at the seems," and thousands of illegal immigrants are being released into the United States as a result.

Border Patrol agents have encountered over 180 large groups (100+ individuals) along the Southwest border so far in Fiscal Year 2019, compared to 13 in FY18 and only 2 in FY17. During May alone, USBP apprehended 49 large groups, including a group of 1,045 last week in El Paso: pic.twitter.com/MTsuDim54f

On Wednesday Secretary of State Mike Pompeo and Vice President Mike Pence met with an official delegation from Mexico to discuss how to approach the ongoing disaster moving forward. President Trump has threatened to slap tariffs on the country if they don't do more to stop the illegal flow of people from Central American to the United States.

.@SecPompeo, @DHSMcAleenan, & I will meet shortly with Mexican Secretary of Foreign Affairs @M_ebrard at the @WhiteHouse. We have a crisis on our Southern Border. @POTUS has made clear that Mexico must do more. https://t.co/XiNBgtrg8i