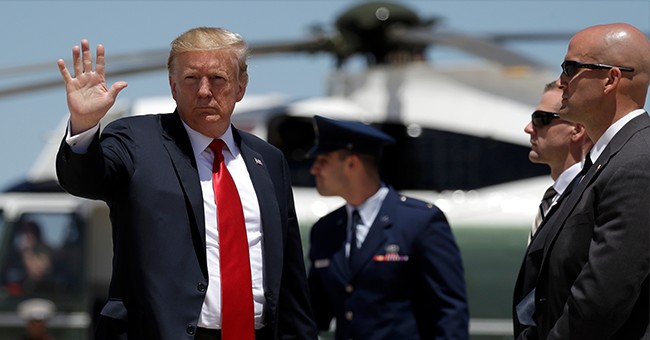 "I think Mueller is a true never-Trumper," Trump said. "No, Russia did not help me get elected."

“Russia didn't help me at all. Russia, if anything, I think, helped the other side,” he continued. "I helped me get elected...Russia had nothing to do with it at all."

Pres. Trump again claims that special counsel Robert Mueller "wanted to be the FBI director and I said no."

"And he loves Comey ... whether it's love or deep like, but he was conflicted, Look, Robert Mueller should have never been chosen," he adds. https://t.co/eWjzLHSv5j pic.twitter.com/y5ztoBpW9c

The comments came before President Trump left Washington D.C. for Peterson Air Force Base in Colorado where he will deliver the commencement speech at the United States Air Force Academy Graduation Ceremony.

Earlier in the morning, he took to Twitter to address comments made by Mueller from the Justice Department on Wednesday.

The Greatest Presidential Harassment in history. After spending $40,000,000 over two dark years, with unlimited access, people, resources and cooperation, highly conflicted Robert Mueller would have brought charges, if he had ANYTHING, but there were no charges to bring!

Russia, Russia, Russia! That’s all you heard at the beginning of this Witch Hunt Hoax...And now Russia has disappeared because I had nothing to do with Russia helping me to get elected. It was a crime that didn’t exist. So now the Dems and their partner, the Fake News Media,.....

....say he fought back against this phony crime that didn’t exist, this horrendous false accusation, and he shouldn’t fight back, he should just sit back and take it. Could this be Obstruction? No, Mueller didn’t find Obstruction either. Presidential Harassment!