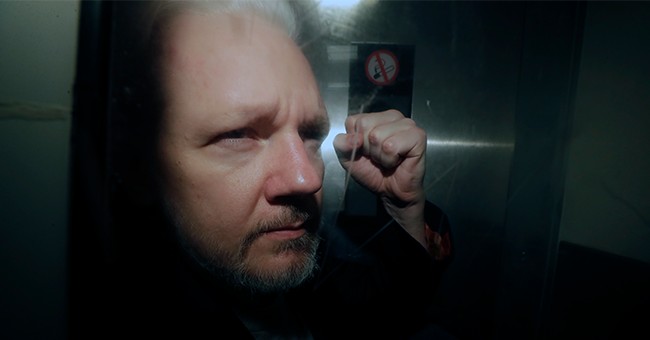 The Department of Justice announced an 18-count grand jury indictment against Wikileaks founder Julian Assange Thursday afternoon, including violations of the Espionage Act. The indictment alleges Assange had a “role in one of the largest compromises of classified information in the history of the United States.“

“The superseding indictment alleges that Assange was complicit with Chelsea Manning, a former intelligence analyst in the U.S. Army, in unlawfully obtaining and disclosing classified documents related to the national defense,” DOJ released in a statement. “Specifically, the superseding indictment alleges that Assange  conspired with Manning;  obtained from Manning and aided and abetted her in obtaining classified information with reason to believe that the information was to be used to the injury of the United States or the advantage of a foreign nation;  received and attempted to receive classified information having reason to believe that such materials would be obtained, taken, made, and disposed of by a person contrary to law; and  aided and abetted Manning in communicating classified documents to Assange.”

In April, Assange was kicked out of the Ecuadorian Embassy in London after living there for years to avoid arrest. He was dragged out of the building and immediately taken into custody by UK authorities. He is currently serving in prison there for failing to surrender back in 2012. Once his sentence is concluded, Assange is expected to be extradited to the United States.

"Assange is presumed innocent unless and until proven guilty beyond a reasonable doubt.  If convicted, he faces a maximum penalty of 10 years in prison on each count except for conspiracy to commit computer intrusion, for which he faces a maximum penalty of five years in prison," DOJ released. "Actual sentences for federal crimes are typically less than the maximum penalties.  A federal district court judge will determine any sentence after taking into account the U.S. Sentencing Guidelines and other statutory factors."