Senator Rubio Explains Why Americans Should Care About Venezuela 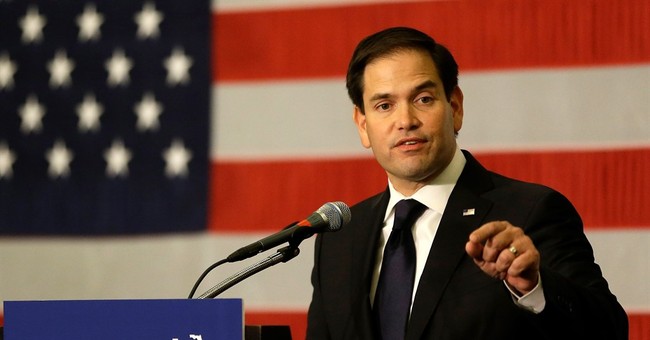 With rolling blackouts, a severe lack of medical care and starvation in Venezuela, the situation inside the country grows more dire by the day as illegitimate dictator Nicolas Maduro desperately clings to power.

As Americans watch the chaos play out on television screens and through Twitter feeds at home, there are questions about why the United States is invested in the situation, the duly elected President Juan Guaido and what American interests are served by being involved.

"The Maduro regime is not a government, it's an organized crime ring. That organized crime ring actively supports - not tolerates, supports - the drug flights out of Venezuela. How it works is the drugs come in from Colombia, they're loaded onto these airplanes and these airplanes take off, sometimes from military airfields, under the protection of the Venezuelan military, headed to Central America where they drop off drugs on some strip in the middle of nowhere that are then trafficked to the border of the United States. And by the way, leaving a trail of violence and instability that drives migrants to our border as well," Rubio said.

With the pro-America, western shift in Central and South America in recent years, the United States has an interest in protecting partners in the region in order to prevent crises in local communities.

"Colombia is in real danger here. They are spending over a billion dollars per year to deal with over, close to 2 million migrants that's threatening to collapse their healthcare system, their schools and so forth but they're also diverting resources away from the drug fight against these cartels and to deal with a migratory crisis. Those drug gangs, do you know where those drugs gangs operate out of? They operate out of Venezuelan territory. The Venezuelans are allowing these drug gangs to operate freely, openly and protected from inside their border," Rubio said. "If Colombia collapses, if there is a serious destabilization of Colombia, the amount of drugs that are going to flow into our streets will be extraordinary. We already have a heroine problem, imagine having a new cocaine problem on top of it."

Further, our enemies, in partnership with Maduro, are using Venezuela as a launching pad to attack the United States. On top of the risk to American communities through Venezuelan drug smuggling, there are serious national security implications of Maduro staying in power.

"Every single one of our geopolitical adversaries is deeply engaged in Venezuela as a foothold to target the United States," Rubio said. "Last week the New York Times, not Fox News, not Breitbart, not Townhall, the New York Times ran a story about how one of the key figures, one of the elite insiders whose family, his parents are from Syria, he's a migrant who immigrated to Venezuela, has direct links to Hezbollah in Iran. In fact, he has sold them official passports to individuals in Iran, Hezbollah and deals he's done with them."

Rubio also said the willingness and current capability of individuals close to Maduro to sell official passports to agents of Hezbollah and Iran is a serious risk. This allows them to travel undetected.

"The Iranians are actively supporting Maduro with cyber operations. The Chinese are in there basically single handedly running their internet block. They have put in place the cheap equivalent of the great cyber wall in China so every time Guiado or something happens in Venezuela, the internet shuts off. The Russians are deploying personnel there for purpose of intelligence," Rubio said.

"The Venezuelan military is in possession of at least 5,000 shoulder fired man pads, anti-aircraft weaponry. This is the most corrupt place in the hemisphere and I promise you, that if you show up with the right amount of cash they will sell you five or six of those and you only need one of them to bring down U.S. aircraft, commercial aircraft. You're telling me if some terrorist  shows up there and says 'can I buy two of these for the right amount of money' they wouldn't sell it to them?" he continued. "I'm not willing to take the chance that the next terror attack in our hemisphere is a man pad attack against a commercial airliner or God forbid some military asset or something of that nature."

The White House continues to be actively engaged in the situation. In partnership with more than 50 other countries, the U.S. backs legitimately elected President Juan Guaido and continues to pressure Maduro to leave the country.

"I spoke to the President on this topic, along with other topics on Tuesday night. I was with him on Air Force One for four hours on Wednesday night, I can tell you the President of the United States Donald Trump...has cared about the Venezuela issue from the first weeks of his administration. He first raised this issue with me before I ever raised it with him," Rubio said, adding the support for Guaido is an international coalition, not simply a U.S. project. "Trump is more aggressive on this than I am."

"I think he doesn’t get enough credit, frankly," he continued. "His administration does not get enough credit for what they have done to put together this international and regional coalition because if you would have told anybody five years ago that Peru, Colombia, Brazil, Honduras, Guatemala, Costa Rica, fill the list, would all be united behind U.S. policy regarding a government in the region, they would say that's not possible."