Data: Christians Are the Most Persecuted Religious Group in the World 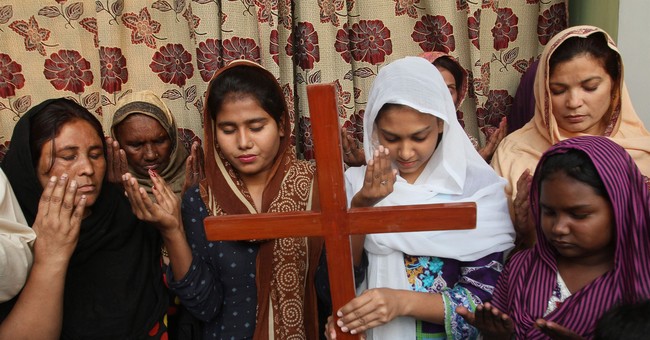 In light of the horrific Easter Day attacks on Sri Lankan Christians over the weekend, where Islamic suicide bombers killed at least 300 people and injured hundreds more, it's important to take a look at the plight of Christians around the world.

According to a Pew Research Center Poll, Christians have become the most persecuted religious group in the world.

Christians remain the most persecuted religious group in the world, new figures from the Pew Research Centre show.

The Centre’s report on religious harassment in 2016 found that Christians were harassed in 144 countries, up from 128 the year before.

The Centre reported that the number of countries with “high” or “very high” levels of government restrictions on religion also rose, from 25 per cent of countries in 2015 to 28 per cent in 2016: 55 of the 198 countries examined by the research.

The report says: “This is the largest percentage of countries to have high or very high levels of government restrictions since 2013, and falls just below the 10-year peak of 29% in 2012.

More data on the issue from Open Doors USA:

In 2014, ISIS started a genocide against Christians in the Middle East. The ethic cleansing eventually led to an official genocide declaration from the State Department.

The Trump administration took things further by eliminating the physical ISIS caliphate through military action, which concluded earlier this year. Additionally, President Trump signed the Iraq and Syria Genocide Emergency Relief and Accountability Act of 2018.  According to the White House, the legislation "directs humanitarian, stabilization, and recovery assistance toward ethnic and minority individuals in Iraq and Syria, including individuals at risk of persecution or war crimes," and "directs the State Department to encourage foreign governments to identify and prosecute individuals suspected of committing crimes against humanity, crimes of genocide, or war crimes, including members of foreign terrorist organizations operating in Iraq or Syria."