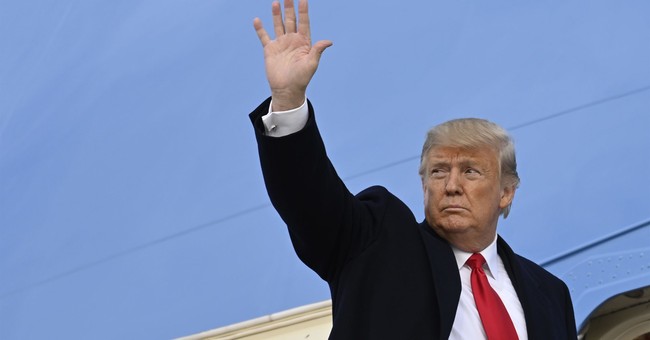 On his way back to Washington D.C. from Vietnam after his summit with North Korean dictator Kim Jong Un, President Trump made a stop at Joint Base Elmendorf-Richardson in Anchorage to visit with U.S. troops.

“As you know, I’m on my way back from Vietnam. I wanted to stop here to share my gratitude to every brave soldier, sailor, airman, marine, coast guardsmen, and national guardsmen who serves in the land of the midnight sun,” Trump said during the stop. “The men and women who serve at JBER share one vital mission: to serve in our country’s last frontier as America’s first line of defense. Since the Second World War, our intrepid service members in Alaska have proudly stood at the top cover for North America.”

“To everyone here today who fights for our flag across the globe, thank you for bravely facing down the danger to protect, and we have such danger out there, the lives and liberty of all Americans. Our country is stronger now maybe then it is ever been. Our military is being rebuilt at a rapid pace,” he continued.

Air Force One over Alaska... pic.twitter.com/mu99c6ZA1P

President Trump will be back at the White House late Thursday night.  On Saturday he will speak to the annual Conservative Political Action Committee conference.

“Our military families are a true national treasure. Without all of the people backing you brave men and women, it wouldn’t work so well for you. Your life would be a lot more difficult. It wouldn’t be the same. You all know that,” he said.