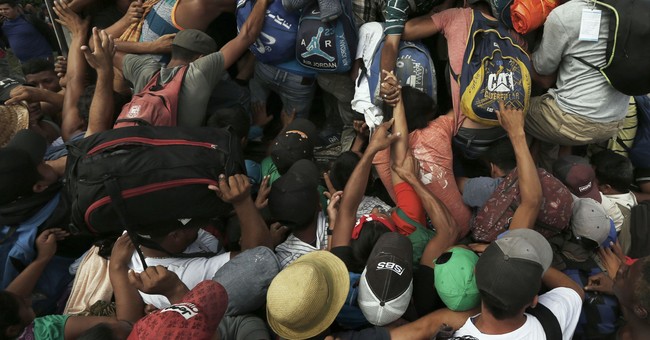 President Trump is threatening to shut down the U.S. southern border with Mexico completely if law enforcement officials there can't control multiple caravans of illegal aliens.

Migrants at the Southern Border will not be allowed into the United States until their claims are individually approved in court. We only will allow those who come into our Country legally. Other than that our very strong policy is Catch and Detain. No “Releasing” into the U.S...

....All will stay in Mexico. If for any reason it becomes necessary, we will CLOSE our Southern Border. There is no way that the United States will, after decades of abuse, put up with this costly and dangerous situation anymore!

Over the weekend, hundreds of illegal aliens attempted to rush the border at the San Ysidro crossing in Tijuana, Mexico.

Fifty illegal aliens were arrested after breaking past police and through a port of entry into the U.S. They were violent against Mexican police officers and threw rocks at U.S. Border Patrol agents.

Dozens of migrants who illegally crossed the U.S. border this weekend as part of a chaotic rush at one of the boundary's busiest entry points are now in custody, a senior Homeland Security official told Fox News.

The official said Monday about 50 migrants have been detained after they crossed the border near San Ysidro, Calif., on Sunday. The exact number of those apprehended is expected to be made public later today, the official added.

Here’s moment right before shot bang. You can see some rocks being thrown. pic.twitter.com/p0M9p7Rx4G

Border Patrol agents deployed tear gas to stop the chaos and are standing by the decision to do so. Department of Homeland Security Secretary Kirstjen Nielson is backing them up.

.@DHSgov will not tolerate this type of lawlessness & will not hesitate to shut down POEs for security reasons. We'll seek to prosecute to the fullest extent of the law anyone who destroys federal property, endangers our frontline operators, or violates our sovereignty.

Today @CBP personnel were struck by projectiles thrown by caravan members. Such actions are dangerous & not consistent w peacefully seeking asylum. The perpetrators will be prosecuted. I will continue to aggressively support DHS personnel as they work to safely secure our border.

Meanwhile, the flow of people north continues as other caravans form in Central America.