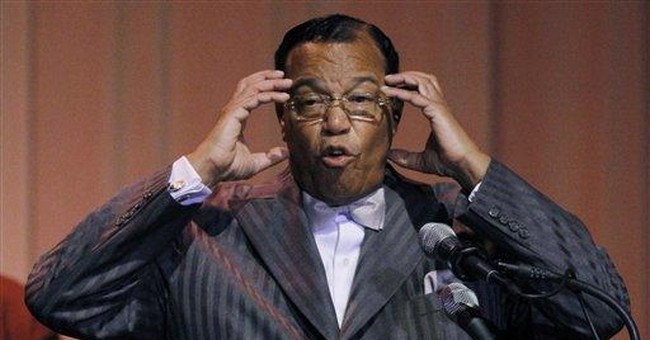 In case you missed it among all of the election chaos last week, infamous hate preacher Louis Farrakhan traveled to Iran and led a "death to America" chant while he was there.

Farrakahn denies leading the chant, despite being caught on video doing so.

Meanwhile, he's back in America and scheduled for a talk in Washington D.C. this weekend.

Join us this Sunday to hear @LouisFarrakhan discuss his Trip to Iran. #Farrakhan #NOISundays pic.twitter.com/DSKrYG0cnq

The Women's March, which has been endorsed by Democrats across the country, has close ties to Farrakahn. Its leaders have referred to him as a mentor and essential leader in today's politics. In recent days they've attempted to distance themselves from his hateful positions, which includes calling Jews "parasites."

Man, if I was paling around with Farrakhan for years, comparing him to Jesus, and refusing to condemn him, I doubt I'd make my pinned tweet something about... Palestine. pic.twitter.com/4za67mITtN

Don’t join this year’s #WomensMarch unless you are ok with #antisemitism. Linda Sarsour supported the radical Muslim Brotherhood. She praised Sharia law, which, among other things, includes second-class status for women and praises Louis Farrakhan https://t.co/ir4G0qaeem pic.twitter.com/5X6EdgzGMw