Moral Clarity at the UN: Praise Pours in For Nikki Haley 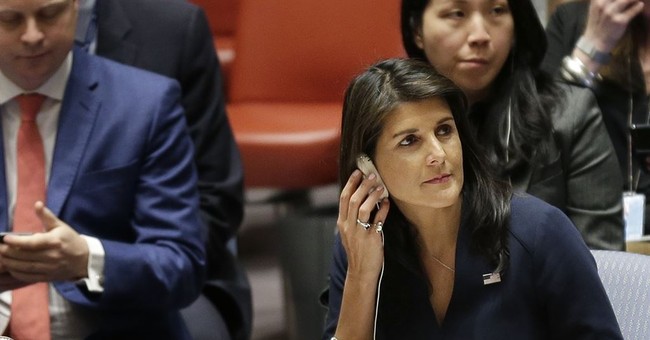 UN Ambassador Nikki Haley officially announced Tuesday morning she will be leaving her post at the global body by the end of the year.

"A lot of people are going to say there's a lot of reasons why I'm leaving. The truth is, I want to make sure this administration, the president has the strongest person to fight. It was blessing to go into the U.N. with body armor every day," Haley said from the Oval Office. "The U.S. is strong again, it's strong in a way that should make all Americans very proud."

"I'll never truly step aside from fighting for our country," she continued, adding she plans to campaign for President Trump in 2020.

Haley leaves the position on a high note and with a long list of accomplishments. Her time at the UN hasn't gone unnoticed by peers and colleagues, who praised her work after she announced the departure.

.@POTUS on @nikkihaley: "That was really the thing I think she did best at the United Nations— she got to know the players." https://t.co/yr6Ul5M4wT pic.twitter.com/OUz1c8aKUi

“First, I want to convey a few words of thanks to our dedicated Ambassador to the United Nations, who we just learned will be stepping down at the end of this year. Our nation has benefited greatly from the tough, skilled leadership that Nikki Haley brought to the United Nations.

“Her tenure will be remembered for her proud reassertion of American moral leadership and her fearless willingness to turn a bright spotlight on critical challenges, from Israel’s sovereignty to Iran’s sponsorship of regional violence. Ambassador Haley has been a key part of the administration’s team that has faced down a wide variety of critical challenges, and done so with distinction.

“She took on this role after an impressive six years as Governor of South Carolina, and quickly proved to be both a skillful advocate for our national interest and a forceful spokeswoman for our principles. I hope this is not the end of Ambassador Haley’s distinguished career in public service. I thank her for her significant contributions.”

Nikki Haley has a very bright future and will be a key player in both the future of the Republican Party and our nation as a whole for years to come.

Ambassador @NikkiHaley has done an outstanding job as United States Ambassador to the United Nations and showed a level of effectiveness rarely seen by someone in this position.

.@nikkihaley was a strong voice for the U.S. & for moral clarity at the U.N. America was blessed to have her representing us. We thank her & her family for their service to our country & the cause of freedom & #HumanRights. pic.twitter.com/Ob43lGEixY

.@SenJohnThune: "@nikkihaley is someone who has been a terrific ambassador for the United States." https://t.co/yr6Ul5M4wT pic.twitter.com/GPm0waY4Z1

.@SecPompeo: "I wanted to thank Ambassador Haley for the good work that she has done. She has been a great partner of mine for the now 5 months that she and I have been working together. And I want to wish her very well in whatever comes next for her." pic.twitter.com/KmywzWWEem