Trump: The Democrats are Engaged in a Con Game Over Kavanaugh and It's Terrible for the Country 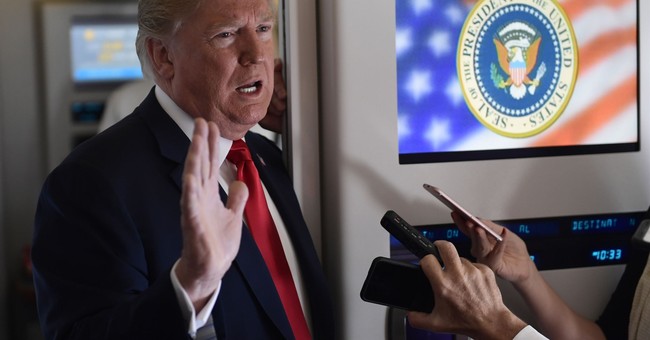 “I think he [Kavanaugh] is just a wonderful human being. I think it is horrible what the Democrats have done. It is a con game, they are really con artists. They are trying to convince – they don’t bite, they don’t believe it themselves – They know he is a high quality person, they don’t believe it, it is just resist and obstruct. They are playing a con game, and they are playing it very well, much better than Republicans," Trump said. "He is one of the highest quality people. He said when he was focused on being number one in his class at Yale, to me, that was so believable. I understand college very well, being number one in your class, I understand a lot of things.  When he said that, I understood exactly. He was so truthful. He’s never had any charges like this, charges come up from 36 years ago that are totally unsubstantiated."

"This is a con game being played by the Democrats," he continued. "These are the same lawyers who have been fighting for years. It is a shame you can do this to a person’s life."

JUST IN: President Trump accused Democrats of playing a "con game" with their calls for delays and investigations into sexual misconduct claims against Supreme Court nominee Brett Kavanaugh. https://t.co/lveqNNyC78 pic.twitter.com/g3t1urvsHp

President Trump also warned this kind of behavior from the left will make people think twice about going into public service.

"Who is going to want to go before the system to be a Supreme Court judge or even a politician? I can tell you that false accusations of all type are made against a lot of people. This is a high quality person, and it would be a horrible insult to our country if this doesn’t happen," he said. "And it’ll be a horrible, horrible thing for future political people. It cannot be allowed to happen. And the Democrats are playing a con game, C-O-N.”

Kavanaugh's accuser, Christine Blasey Ford, is scheduled to testify in front of the Senate Judiciary Committee on Thursday. Yesterday her attorneys sent a letter to Chairman Chuck Grassley about concerns they have with the conditions for her testimony, prompting speculation Ford may not show up.