Bolton: Iran Must Stop Its Belligerent Behavior and Until Then, We're Tightening the Screws 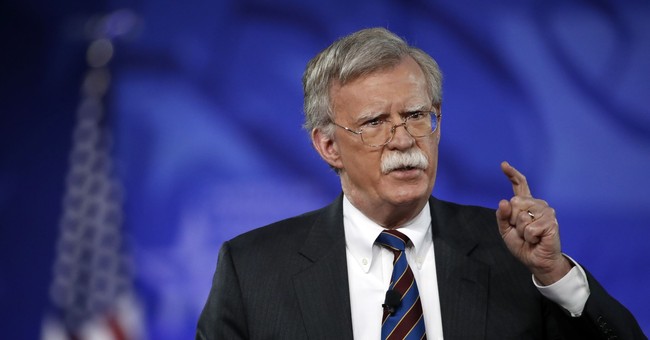 On Monday morning the White House officially announced the reinstatement of sanctions on Iran after the U.S. left the nuclear agreement earlier this year.

“Our policy is based on a clear-eyed assessment of the Iranian dictatorship, its sponsorship of terrorism, and its continuing aggression in the Middle East and all around the world,” President Trump said in a statement.

During an interview with Fox News, National Security Advisor John Bolton detailed the move and called on the regime to end its "belligerent" behavior.

"This is an indication of how strongly we feel that the Iranian nuclear weapons program, its ballistic missile program, it's support for terrorism, it's belligerent activity in the Middle East have to stop," Bolton said. “We want to put unprecedented pressure on the government of Iran to change its behavior, and so far they’ve shown no indication they’re prepared to do that.”

.@AmbJohnBolton: “This is an indication of how strongly we feel that the Iranian nuclear weapons program, its ballistic missile program...have to stop.” @AmericaNewsroom https://t.co/KTCn9eDlq9 pic.twitter.com/t5faFVTDEg

.@AmbJohnBolton: “I think we’re using the economic system we have and its strength to put pressure on these rogue regimes.” @AmericaNewsroom https://t.co/KTCn9eDlq9 pic.twitter.com/rmS4XSnNFw

90 days ago, @POTUS withdrew U.S. from the failed #IranDeal. Today, sanctions on the regime in #Iran were re-imposed to counter its malign activities. The regime must use Iran's resources to help its citizens, not support terror & enrich the leadership. https://t.co/hES0cmwjYc

So far, it looks like the strategy is working.

Islamic Republic caught btw rocks and hard places: Getting pounded financially by U.S., militarily by Israel; facing major domestic protests; and, risks losing EU if it escalates its nuke program. It needs an escape hatch. Will it be escalation or negotiation?

Since JCPOA, Islamic Republic lost 14,000 centrifuges, heavy water reactor, almost 50% of value of currency, most foreign biz deals, majority of military infrastructure in Syria, and support of majority of its people. Maybe this actually is a bipartisan success story?