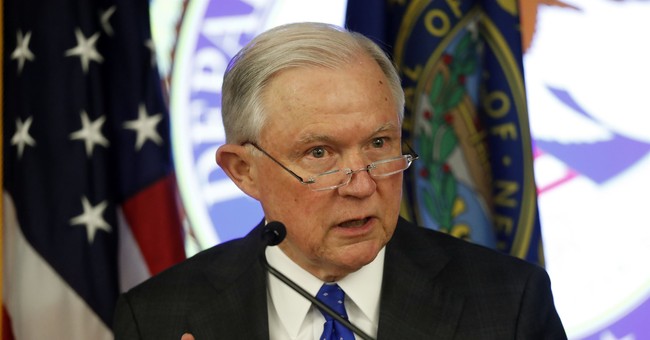 The term "illegal alien" has been used by Immigration and Customs Enforcement and Border Patrol agents for decades. "Alien" is used to classify both legal and illegal immigrants. Legal aliens or resident aliens are named as such until U.S. citizenship is obtained. Then, they become Americans. "Alien" can be found all over federal immigration forms.

Regardless, some folks in the media are appalled at the idea that Attorney General Jeff Sessions would instruct Department of Justice attorneys to use the term "illegal alien" rather than "undocumented immigrant"  to describe individuals in the U.S. illegally.

The Justice Department has instructed US attorneys offices not to use the term "undocumented" immigrants and instead refer to someone illegally in the US as "an illegal alien," according to a copy of an agency-wide email obtained by CNN.

According to the email, the Justice Department uses terms in the US Code to describe an individual who is illegally in the US, and thus refers to them as "an illegal alien."

"The word 'undocumented' is not based in US code and should not be used to describe someone's illegal presence in the country," the email states.

An immigrant who is in the US legally or whose status is unknown is to be described by their country of citizenship, it adds.

DOJ leadership expecting attorneys to use legal terms instead of leftist political jargon shouldn't be surprising. For reference, here's just one example of the term "alien" used in U.S. Code.

(a) Improper time or place; avoidance of examination or inspection; misrepresentation and concealment of facts

(1) at least $50 and not more than $250 for each such entry (or attempted entry); or
(2) twice the amount specified in paragraph (1) in the case of an alien who has been previously subject to a civil penalty under this subsection.

Anyone upset at this language is only proving their ignorance. I’ve been a legal alien here for 12 years. On every line of every form of every step of every stage of immigration from the very beginning of the process states this. It’s not difficult nor controversial nor racist.

Until the time of my mother’s US naturalization she was referred to as a “legal alien”. It’s just a government term, people.

It's also the term used in ALL immigration law pic.twitter.com/RN5USzdYHj

As Hans Von Spokovsky has written, "Undocumented immigrant' is the term created by the Left and pushed by activist liberal organizations such as La Raza to obscure the illegal actions and conduct of those who violate our immigration laws."

Fox News' Gutfeld: Chauvin Verdict Was Extortion by the Left-Wing Mob
Townhall
Journalist posts video of 'a semi truck that just came aggressively through' crowd blocking street in Minneapolis
Twitchy
After the Derek Chauvin Verdict: Initial Thoughts and What Comes Next
Redstate
New Dispatch From The Brady White Files: Why Risk Your Life if You're A Cop?
PJ Media