Bolton: Trump Won't Meet With Putin Until the Phony Witch Hunt is Over 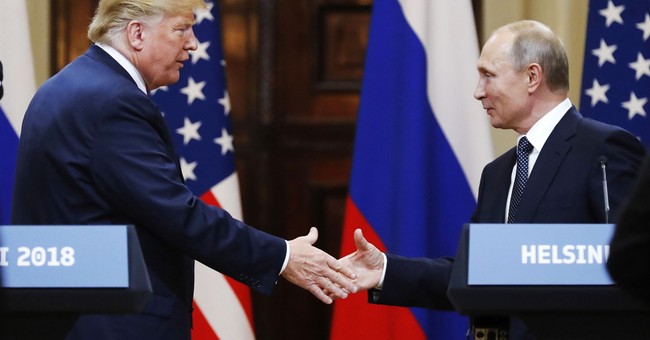 "The President believes that the next bilateral meeting with President Putin should take place after the Russia witch hunt is over, so we've agreed that it will be after the first of the year," Bolton told the White House press pool, referring to Robert Mueller's Special Counsel investigation into the 2016 presidential election.

President Trump met with Putin in Helsinki last week. Shortly after the meeting, Press Secretary Sarah Sanders announced planning for a meeting with Putin was already underway for the fall.

The Russian government announced earlier this week Putin wasn't ready to accept an invitation from the White House to visit the U.S.

The Kremlin on Tuesday said Russian President Vladimir Putin does not think it's the right time to accept President Donald Trump's invitation to visit Washington, DC, this fall. It said the two sides need to "let the dust settle" from the recent Trump-Putin summit in Helsinki, Finland, according to Reuters.

Yesterday President Trump tweeted that he was concerned about Russian meddling in the upcoming 2018 midterm elections.

I’m very concerned that Russia will be fighting very hard to have an impact on the upcoming Election. Based on the fact that no President has been tougher on Russia than me, they will be pushing very hard for the Democrats. They definitely don’t want Trump!