After IG Report, Gowdy Blasts FBI: I am Angered and Extremely Disappointed 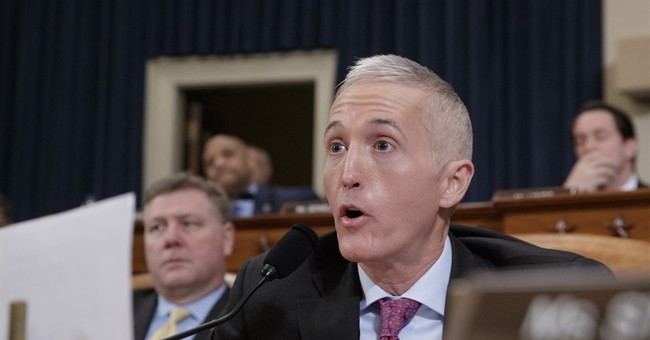 Here is the statement in full, which details finding in the report (bolding is mine):

I am alarmed, angered, and deeply disappointed by the Inspector General’s finding of numerous failures by DOJ and FBI in investigating potential Espionage Act violations by former Secretary of State Hillary Clinton.

The investigation was mishandled. The investigatory conclusions were reached before the end of the witness interviews. The July 5th press conference marked a serious violation of policy and process. And the letters to Congress in the fall of 2016 were both delayed in substance and unnecessary in form.

Moreover, the treatment afforded to former Secretary Clinton and other potential subjects and targets was starkly different from the FBI’s investigation into Trump campaign officials. Voluntariness and consent in the former were replaced with search warrants, subpoenas, and other compulsory processes in the latter. Many of the investigators and supervisors were the same in both investigations but the investigatory tactics were not.

The report also conclusively shows an alarming and destructive level of animus displayed by top officials at the FBI. Peter Strzok’s manifest bias trending toward animus casts a pall on this investigation. Bias is so pernicious and malignant as to both taint the process, the result, and the ability to have confidence in either.

The law enforcement community has no greater ally in Congress than me. But continued revelations of questionable decision making by FBI and DOJ leadership destroys confidence in the impartiality of the institutions I have long served, respected, and believed in.

It is now urgently incumbent on Attorney General Sessions and Director Wray to take decisive action to restore Americans’ confidence in our justice system.