BREAKING: President Trump Says Summit With North Korea is Back On 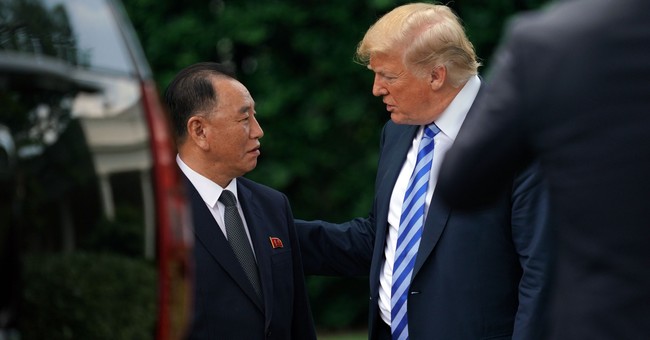 "I think we're going to have a relationship and it'll start on June 12th," Trump said after meeting with Chol for nearly an hour. "We'll be meeting on June 12th in Singapore."

Chol traveled to Washington D.C. Friday morning after meetings in New York with Secretary of State Mike Pompeo. He delivered a personal letter to President Trump from Kim Jong Un at the White House.

The proposed summit offers a historic opening for @POTUS and Chairman Kim to boldly lead U.S. and #DPRK into a new era of peace, prosperity, and security. Our countries face a pivotal moment in which it could be nothing short of tragic to let this opportunity go to waste. pic.twitter.com/DDkTqnlI2n

.@POTUS has made it clear that if Kim Jong-un denuclearizes, there is a brighter path for #DPRK. We envision a strong, connected, secure, and prosperous #NorthKorea that maintains its cultural heritage but is integrated into the community of nations.

The news comes a week after President Trump cancelled the summit.

"We greatly appreciate your time, patience, and effort with respect to our recent negotiations and discussions relative to a summit long sought by both parties, which was scheduled to take place on June 12 in Singapore. We were informed that the meeting was requested by North Korea, but that to us is totally irrelevant. I was very much looking forward to being there with you. Sadly, based on the tremendous anger open hostility displayed in your most recent statement, I feel it is inappropriate, at this time, to have this long-planned meeting," President Trump wrote. "Therefore, please let this letter serve to represent that the Singapore summit, for the good of both parties, but to the detriment of the world, will not take place. You talk about your nuclear capabilities, but ours are so massive and powerful that I pray to God they will never have to be used."