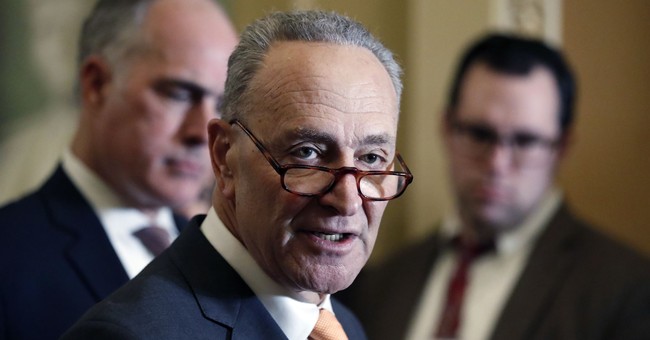 While President Trump's usual critics are again slamming him for officially moving the U.S. Embassy from Tel Aviv to Jerusalem Monday, which Congress has repeatedly and overwhelming voted in favor of, Minority Leader Chuck Schumer is offering him some rare praise.

“In a long overdue move, we have moved our embassy to Jerusalem. Every nation should have the right to choose its capital. I sponsored legislation to do this two decades ago, and I applaud President Trump for doing it,” Schumer released in a statement.

Although Democrat praise for Trump is rarer than an endangered species on Capitol Hill, Schumer wasn't the only liberal lawmaker to chime in.

“I welcome the opening of the United States embassy in Jerusalem, the eternal capital of the Jewish people and the State of Israel. This move is long overdue, and I look forward to visiting," House Foreign Affairs Committee Ranking Member Eliot Engel said. "I look forward to the construction of a permanent embassy, and as Ranking Member of the Foreign Affairs Committee, I will do everything in my power to support the next steps.”

During Monday's U.S. Embassy opening ceremony in Jerusalem, not a single Democrat attended. Former Democrat and current independent Joe Lieberman, who served in the Senate for 24 years, was there for the festivities.

“The first thing is that President Trump is not only unconventional, he is also new to a lot of these long-standing diplomatic controversies, so he does not have all the baggage from the past,” Lieberman told the Jerusalem Post. “I think he just gave it a fresh look and said, ‘Well, why aren’t we recognizing Jerusalem? After all, Israel is our closest ally. Why are we timid about saying what is obviously true?” Lieberman said he thought that for Trump, this is “a show of both personal and national strength: that both he and the US do what they think is right.”