Laura Ingraham Presses Mexican Ambassador on Caravan: Why Didn't You Stop These People? 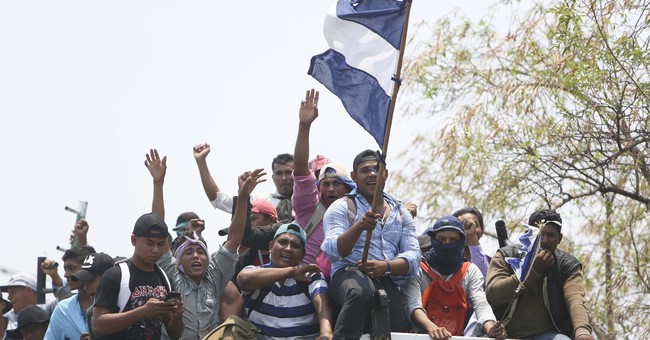 After traveling for thousands of miles from Honduras, through Mexico and to the southern border of California, members of a illegal alien caravan are demanding asylum in the United States.

Earlier this week the Department of Justice handed down a number of federal charges for illegal aliens on the caravan. Some of the members were previously deported from the United States and connected to violent crimes.

While the caravan was in central Mexico three weeks ago, President Trump slammed the Mexican government for failing to do more to stop it from moving further north.

Mexico, whose laws on immigration are very tough, must stop people from going through Mexico and into the U.S. We may make this a condition of the new NAFTA Agreement. Our Country cannot accept what is happening! Also, we must get Wall funding fast.

Mexican authorities claimed to break up the caravan and yet, hundreds of its members have arrived at the U.S. border anyway.

Despite the Democrat inspired laws on Sanctuary Cities and the Border being so bad and one sided, I have instructed the Secretary of Homeland Security not to let these large Caravans of people into our Country. It is a disgrace. We are the only Country in the World so naive! WALL

During an interview on her show Thursday night, Fox News host Laura Ingraham pressed  Mexican Ambassador to the United States Geronimo Gutierrez on why Mexico didn't do more in this case to stop illegal immigrants from coming to the U.S.

She also further detailed the crisis earlier this week.

.@IngrahamAngle: "The current situation at our southern border is completely out of hand." pic.twitter.com/y50yU4HGP9