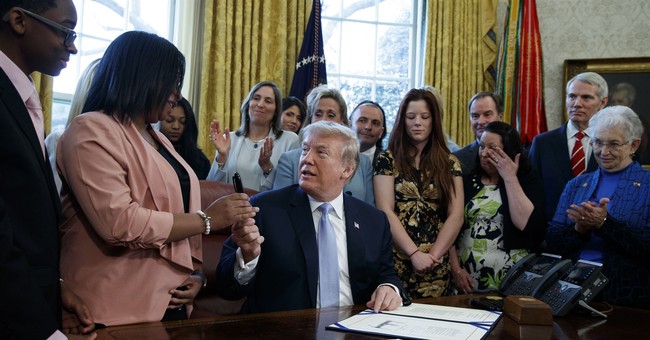 President Trump signed the Allow States and Victims to Fight Online Sex Trafficking Act of 2017 Wednesday from the White House and pledged his administration will continue to combat sex trafficking with federal resources.

"I want to thank the survivors and families who join us today.  I'm signing this bill in your honor.  And we are all together -- politicians, both Republican and Democrat -- signing this and representing this to you in your honor.  So thank you all very much.  We very much appreciate it.  You're very brave," President Trump said. "Human trafficking is a modern form of the oldest and most barbaric type of exploitation. It has no place in our world.”

"You've endured what no person on Earth should ever have to endure, and we are going to do everything in our power to make sure that traffickers are brought to a swift and firm justice.  And I've heard statistics where trafficking in the world is more now than it ever has been ever in the history of the world," he continued. "And you wouldn't believe that with, you know, modern-day everything.  But they use modern-day better than law enforcement can use modern-day, whether it's the Internet or anything else.  And you wouldn't believe that.  But trafficking, it's probably worse today than at any time in history."

According to GovTrack, the bill "allows the government to prosecute websites which knowingly help or promote sex trafficking, and also allow users to sue those websites."

The bill was passed in rare bipartisan fashion through Congress last week. During the signing Yvonne Ambrose, whose daughter was a victim of sex trafficking, stood next to President Trump and became emotional.

Earlier this week the Department of Justice announced the take down of a prominent prostitution and sex trafficking website. Additionaly, the Department announced a number of prosecutions against individuals using the site for criminal activity.

"For far too long, Backpage.com existed as the dominant marketplace for illicit commercial sex, a place where sex traffickers frequently advertised children and adults alike,” Attorney General Sessions released in a statement.  “But this illegality stops right now.  Last Friday, the Department of Justice seized Backpage, and it can no longer be used by criminals to promote and facilitate human trafficking. I want to thank everyone who made this important seizure possible: all of our dedicated and committed professionals in the Child Exploitation and Obscenity Section and our U.S. Attorney’s Office in the District of Arizona, the FBI, our partners with the IRS Criminal Investigation, our Postal Inspectors, and the Texas and California Attorney Generals’ offices. With their help, we have put an end to the violence, abuse, and heartache that has been perpetrated using this site, and we have taken a major step toward keeping women and children across America safe.”