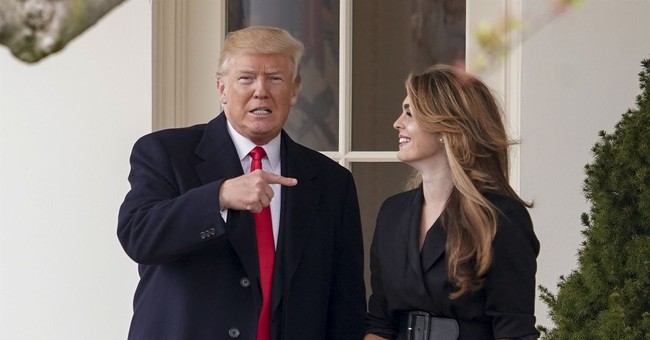 Outgoing White House Communications Director Hope Hicks has officially said goodbye to President Trump and will leave her position in the administration for a final time Thursday afternoon.

Before boarding Marine One on his way to an infrastructure speech in Ohio, President Trump made it a point to pose with Hicks in front of the press pool on the South Lawn before saying goodbye and going on his way.

"Hope was a tremendous leader for the team she’s someone who has been with the president since the early days. She was part of a team that was very small during the campaign. Since being in the administration she has provided countless amounts of advice and worked with all of you day in and day out," White House Spokeswoman Lindsey Walters said onboard Air Force One.

Hicks announced her resignation a month ago shortly after testifying in front of the House Intelligence Committee for longer than eight hours. Staffers were reportedly in tears over her decision to leave the administration.

"There are no words to adequately express my gratitude to President Trump. I wish the President and his administration the very best as he continues to lead our country," Hicks said in a statement at the time.

It is unclear whether President Trump will fill the communications director position, but Treasury Department spokesman Tony Sayegh and White House Director of Strategic Communications Mercedes Schlapp are reportedly in the running for the job.